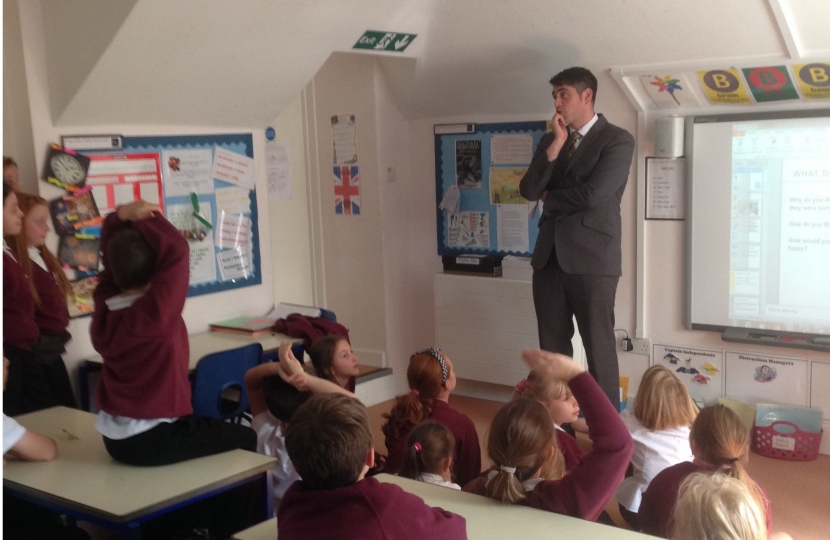 Scott has been campaigning for the Government to address the disparity in pupil funding between urban and rural schools and implement a new fairer funding formula.

Scott has therefore joined other MPs from across the UK in calling for a fairer funding model which recognises the challenges facing schools in rural areas like North Cornwall. In October 2015, Scott signed a letter to the Prime Minister along with 110 other MPs asking that school funding be made fairer and repeated these calls in Parliament on a number of occassions.

In July 2017, the Government announced £1.3 billion extra for schools, and in September after lengthy consultation with schools and the public, it revealed its new National Funding Formula which will implement a fairer funding model and deliver an increase in funding for every school and pupil in North Cornwall, with an average funding increase of 4.3%.

Following a rigorous assessment process, the Secretary of State for Education has announced over £434 million for 1,476 projects at 1,243 academies, sixth form colleges and non-diocesan voluntary aided schools.

Boris Johnson: Only the Conservatives will protect standards in our schools

A Conservative majority government will give Ofsted greater powers and more money to improve discipline in classrooms and bolster school standards, under new plans revealed today.

North Cornwall's MP, Scott Mann, and his Cornish colleagues have met with Secretary of State for Education, Gavin Williamson, to press for fairer funding for Cornish children.

The Prime Minister has announced that we are boosting schools with a record £14 billion, levelling up per pupil funding across the country so every child in North Cornwall has a world class education.

RGC is a two year, £200 million UK-wide programme focused on rural areas and the Government has initially prioritised sites including Cornwall.

Scott's speech in Parliament on the School Funding Debate

Was delighted to speak in today's School Funding debate in Parliament. I spoke on behalf of Cornish Headteacher's to raise the issue with lesser funding in North Cornwall as opposed to London.

Find my speech below:

Scott Mann has welcomed new school funding levels for which, after campaigning for the past two years for fairer funding, will see schools in North Cornwall receive significant increases.

MP for North Cornwall, Scott Mann, has welcomed an announcement by the Government that an extra £1.3 billion will be provided for schools between 2018 and 2020.

Scott Mann has welcomed the announcement from Education Secretary Justine Greening that schools are to receive £415 million to help pupils benefit from healthier, more active lifestyles.

September 2019 - The Prime Minister has announced that we are boosting schools with a record £14 billion, levelling up per-pupil funding across the country so every child in North Cornwall has a world-class education. The cash boost will mean that every secondary school in North Cornwall will receive a minimum of £5,000 per pupil next year and every primary school will get a minimum of £4,000 per pupil from 2021-22, rising at least in line with inflation

September 2017 - After a lengthy consultation, the Government publishes its new National Funding Formula to be rolled out for 2017/18. The new formula will see a funding increase for all schools in North Cornwall which recognises the rurality and sparsity of schools in the countryside. The constituency will see an average 4.3% rise in funding.

July 2017 - The Government announced an extra £1.3 billion for schools funding which will see funding increase for every pupil, with underfunded schools seeing potential increases of 3%. More detailed proposals will be published in the Autumn as part of the new National Funding Formula.

May 2017 - The Conservative Party promised to increase spending on schools, with no pupil losing out under a new funding formula. Total school spending would increase by £4 billion by 2022.

December 2016 - Stage 2 proposals for a National Funding Formula show significant gains for schools in North Cornwall, with some seeing tens of thousands of pounds in potential extra funding.

November 2015 - A new 'National Funding Formula' will be introduced to address the disparity between rural and uban schools, with a Government consultation to be launched in the New Year.

2015 - The Government has announced it will protect the amount spent on each pupil and will honour the election pledge of making schools funding fairer. In 2015-16, an additional £390 million funding has been provided for the 69 least well-funded local authorities in the country, the biggest step toward fairer schools funding in 10 years.

And the possibility of a "Rural Funding Challenge" here