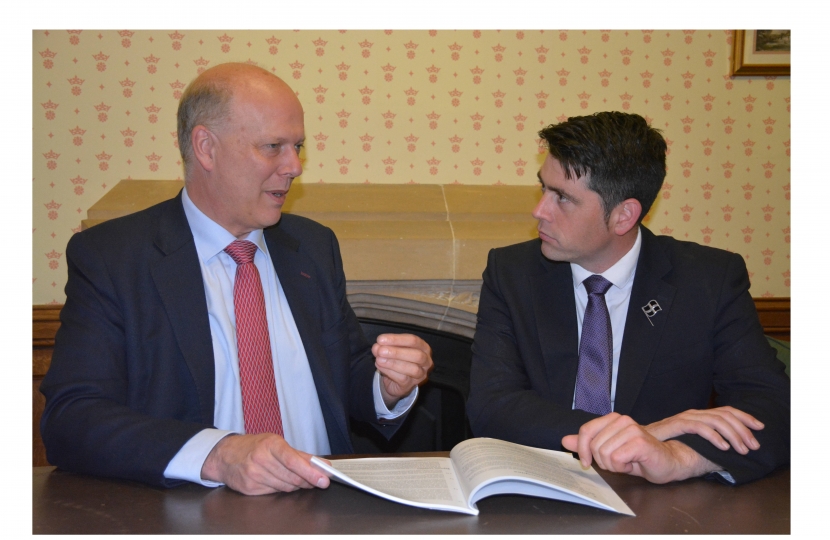 A top government minister has heralded Conservative Candidate for North Cornwall, Scott Mann, as a 'first-rate' MP during a visit to Camelford on Thursday.

The Secretary of State for Transport, Chris Grayling, was visiting the town to discuss traffic congestion and air pollution in light of calls from Scott Mann and other local campaigners for a bypass.

During his visit, the minister described how Scott Mann had regularly campaigned for a bypass in Parliament when he was MP for North Cornwall.

As well as a bypass for the long term, Scott has urged Cornwall Council to implement short term measures to alleviate congestion and pollution using millions of pounds of roads funding that was awarded by the Government.

“We [the government] provide substantial support on a regular basis for local transport schemes. This is a scheme which would need to be brought forward by Cornwall Council, and given what I’ve seen in Camelford today, I will engage very constructively with that.

“I’m very clear that we need to provide more support for improvements on the ‘A’ road network. Not just on our motorways, not just on our principle trunk roads like the A30, but some of the other roads and we’re going to be focussing more on those in the years ahead.”

As MP for North Cornwall before parliament was dissolved on the 3 May, Scott Mann took his bypass campaign to the House of Commons on a number of occasions where he highlighted the problems to transport and environment ministers.

Chris Grayling said he was aware of the original bypass plans from 2004 and that the process of building one would need to involve Cornwall Council putting forward a proposal which central government could support, and that he would engage “constructively” with any proposals.

“What North Cornwall has had in the past two years is a first-rate local MP who has represented the area vigorously and who has been harassing me, the Transport Secretary, in Westminster about the need for this bypass. That’s something North Cornwall didn’t have before in the days of a Lib Dem MP.”

“There are significant air quality problems in Camelford town centre which I have raised with environment ministers, and the town has been designated as an Air Quality Management Area by Cornwall Council. I have also asked Cornwall Council to use a new £4 million road improvement grant from the Government to help alleviate congestion and pollution in the town.

“As well as congestion and pollution, there is also a commercial argument for a bypass. We saw the benefits brought to Wadebridge with its bypass some years ago, with more people attracted to the town centre while there was less through-traffic.

"We can have the same in Camelford and I think a bypass would greatly benefit the town’s businesses. I'm very pleased to have shown the Transport Secretary around Camelford and I look forward to discussing the idea of a bypass with him further."