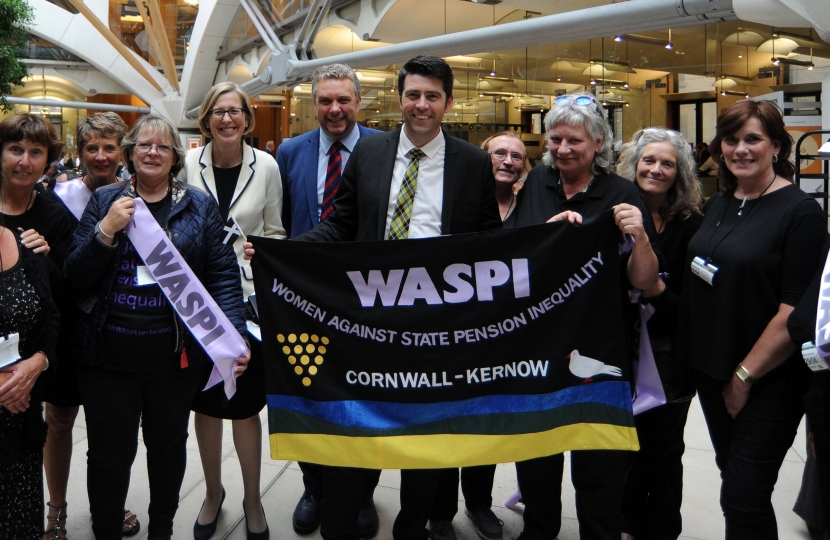 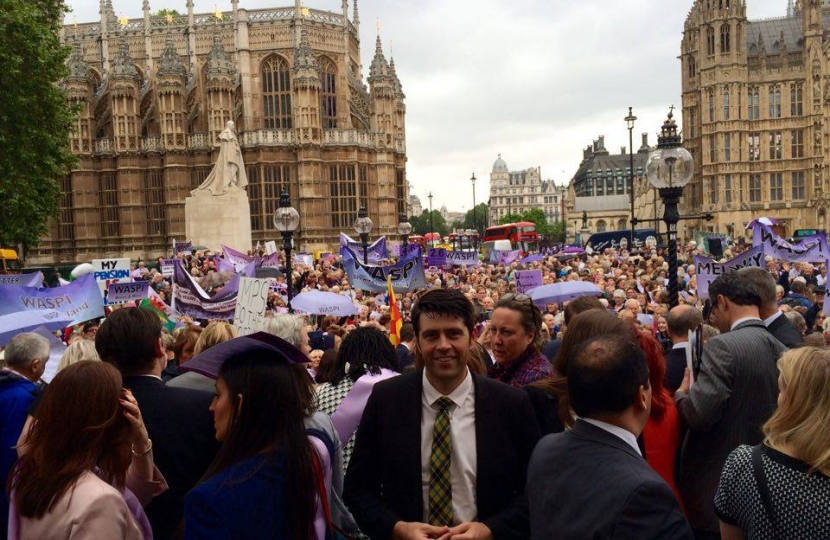 Three of the county’s MPs met with women from Cornwall on Wednesday, 29th June as a WASPI demonstration descended on Westminster.

The demonstration was attended by hundreds of women who have had their State Pension Age moved back from 64 to 66 after changes to legislation in 2011.

In light of the changes, the Women Against State Pension Inequality (WASPI) group was set up to lobby the Government and MPs to implement transitional arrangements for women born in the 1950s.

Their State Pension Age had previously been increased to 64 in 1992, and the Government says the latest change is in light of increases to life expectancy and to adhere to EU equality legislation, so that both women and men receive their State Pension at 66.

Scott Mann MP, who is also the vice-chair of the WASPI All Party Parliamentary Group, said:

“I’ve met or spoken with many women from North Cornwall who are affected by these changes, and I think giving someone just four years to adjust to an 18 month rise in pension age is unfair.

“I think a mistake was made in the last parliament of which I wasn't a part of, and that the Government has a duty to implement some form of transitional arrangement.

“Women in North Cornwall have worked hard for many years and have paid into the pot expecting to get a State Pension at 64. With changes at such short notice, they deserve some help and I’m determined to work with colleagues to get a fairer deal for them.”

Kathryn Pearn, who took part in the rally and from North Cornwall, said:

"Alongside many Cornish ladies, I made the trip to London to represent the many like-minded women born in the fifties from North Cornwall who are affected by the pension changes.

“We believe in equality but it's the lack of notice, or in my case no notice at all, about the change in our pension age that has left us unable to plan for our futures. I have already paid in 42 years of National Insurance payments and due to ill health was forced to give up a job I loved.

“Personally, I always planned for, and believed, that I would retire at 60 and I strongly feel that we haven't been given a fair transitional period to make alternative arrangements.

“I would personally like to thank Scott Mann for giving up his time supporting and listening to us at the protest and for showing such a passion for the well-being of his constituents."

“It was great to see representatives from Cornwall attend Parliament for the WASPI action day. I remain committed to working with colleagues in Westminster to try to find a sensible solution that improves the situation of women currently affected by the state pension age changes."

"As women of a certain age individually we felt helpless to act against the might of the government taking our pensions away so rapidly.

“Until I found WASPI I had no voice, and your support for the campaign, along with over 120 other MP's across all parties has made our voice more powerful.

“I, along with over 30,000 other Cornish women affected by these changes would like to thank you for standing up against this injustice."

The Cornwall WASPI group can be contacted via the following address: cornwallwaspifriends@outlook.com