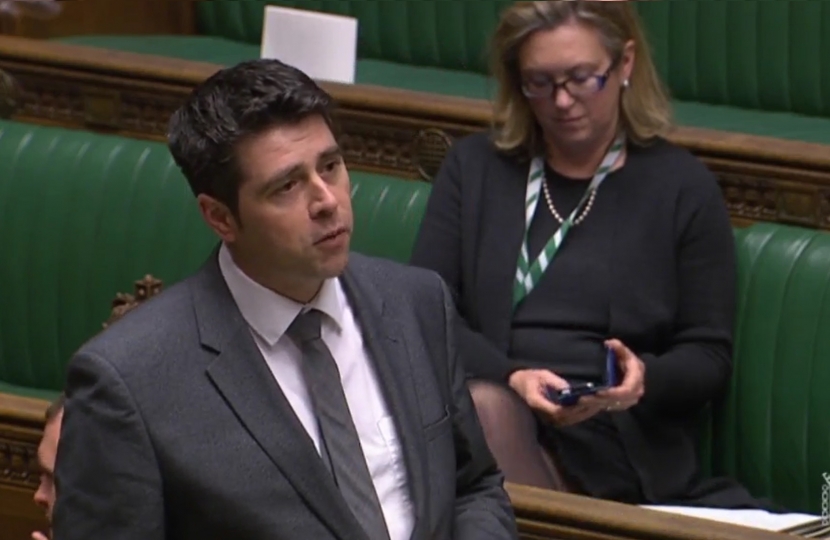 I welcome the new shadow Secretary of State to his place. It is nice to have a fellow west country MP there and I look forward to working with him on the Agriculture Bill and the fisheries Bill and, importantly, on putting provisions on angling into the latter.

I am pleased to have been called to speak on the Second Reading of this very necessary Bill. The Government’s manifesto commitment to invest £3 billion in our farmers and farming communities over the lifetime of this Parliament is to be welcomed. Continuity is so important to our farmers now, with all the uncertainty in the marketplace, and the Government have proved again that they are committed to our farmers and our farming communities. We are moving from a rather ridiculous system where people are paid for land rather than public goods. Farmers in the UK receive £3.5 billion annually in farming support under the common agricultural policy. More than 80% of the support is paid directly to farmers, based broadly on land and land management. A lot of that is taken up by hedge funds and other financial organisations, which receive an annualised income. We have to move away from that system to something that supports our farmers and farming industry.

The previous CAP had nothing in place for soil erosion. We lose 2 billion tonnes of topsoil into our rivers every year. We need a replacement to ensure that that does not happen. There is very little in there about habitats, save for the rather dysfunctional element of pillar 2 of the CAP funding; very little about production, other than silly things about people having to grow three crops; and nothing about catchment farming. I hope we are moving away from a system where our farmers have to map their land. I have dealt with countless constituents who have brought cases to me where their topographical land management has been done from an aerial viewpoint and where the numbers the RPA says they have they do not actually have. Moreover, many of my moorland farmers have been waiting three years for payments under pillar 2—the higher stewardship element. That is unacceptable. We need to move away from the historic system to a better system.

What do we want from a new agricultural scheme? I am no expert, but I tend to listen to people who are. I have regular meetings with farmers in my constituency of North Cornwall. They are the custodians of the countryside and understand what they want from a future agricultural system.

My farmers want a less bureaucratic system and one that is locally administered, has local support, supports younger people to get involved in farming, supports more tenant farms and recognises that local factors and local contributions can be submitted. They want a scheme that supports diversification in farming through the planning system to allow them to diversify into other projects. As the shadow Secretary of State said, they want to move away from having to supply around the country to more localised supply chains and localised control.

I want to explore what “public good” might mean. I am proud to have the Camel cycle trail running through my constituency, from Padstow to Bodmin. It gets 500,000 visitors a year. We could do much more in the “public good” element in the Agriculture Bill to expand cycleways across the country—I am hoping there might be Members on both sides of the House who want to create a cycleway all the way from John o’Groats to Land’s End in Cornwall.

There is much to consider. We have a footpath network, which is administered by the local authority currently, that is not fit for purpose. The Government have an opportunity to take some control over that and for farmers to be paid for upkeep and better access to the countryside, be that cycleways or footpaths.

When I first became a Member of Parliament, I had the pleasure of taking part in a soil inquiry in the House of Lords, and heard about all the good-quality topsoil that was being flushed into the rivers every year. It struck me that farmers were investing in their soil but receiving no benefit from that investment. It would be nice to see some benefit resulting from improved soil quality.

One of the issues that we discussed during the inquiry was how we could maintain better soil access. He is no longer in the Chamber, but the former Chairman of the Environment, Food and Rural Affairs Committee—or hopefully the new Chairman; I know that he is standing for re-election—mentioned the importance of planting more trees around rivers and ensuring that some of that soil erosion does not happen.

When I had the pleasure of visiting a higher-level stewardship scheme in Tregirls, near Padstow, I learned about the reintroduction of the grey partridge—its numbers had diminished over the years, but the populations were growing—and the work that was being done to provide nesting grounds for corn buntings. I also had the pleasure recently of meeting representatives of the Westcountry Rivers Trust, who showed me some of the work that they were doing with upper catchment farming. I believe that if we can take the slurry pits out of some of our rivers, we will be able to improve water quality as well as the environmental management of farms. Those were ​joint projects involving both the trust and South West Water, and I think that they will provide a good basis for a catchment-sensitive farming package.

I want to say something about the upper catchment in particular, and about the spawning grounds for salmon and sea trout. We have a big problem when our rivers are in spate and all the water goes into the river very quickly. The water then tends to flush out to sea very quickly as well, wiping out all the biodiversity in the river. I think that we should invest much more in our salmon and sea trout grounds so that their spawning beds are there for the future and the species are returned to the river as far as is as possible.

The Angling Trust said this about the Agriculture Bill:

“We believe this Bill presents a once in a generation opportunity to address the impact agriculture has on our freshwater environment and, therefore, on healthy fish populations. We welcome the emphasis on good soil management and restoration. We will be looking for a clear framework to effectively manage pollution from agriculture and from residential pollution and to ensure that any future…payments scheme incentivises good land management in relation to water and penalises poor practices. This must be supported by effective regulation and advice to farmers”.

I would be grateful to hear from the Minister whether the amounts for future years can be paid in one go. I intervened on the Secretary of State about this. One of my local farmers said to me recently, “If we know that the payments will be made over a longer period, would it not be wise to give farmers the option to have them rolled up into one payment so that they can invest in their farms at an early stage?” I thought that that was quite a sensible idea, because it would allow farmers to invest in their businesses when they needed to do so.

What am I looking for as the Bill progresses? I am looking for a locally administered scheme, with payments agreed from the previous year and made on day one, to be run in conjunction with organisations such as the Royal Society for the Protection of Birds, the Environment Agency, the Soil Association, the Westcountry Rivers Trust and the Woodland Trust. We could bring in Sustrans to look into whether a cycleway is a possibility. I am passionate about cycling, and I think that we have a real opportunity to open up our countryside so that more people have access to it.

We could also work alongside local anglers. Yesterday, the Norwegian fisheries Minister and I discussed what was happening to fisheries and agriculture in Norway. The Norwegians impose an obligation in regard to boats and quotas—financial organisations cannot invest in them. We might well want to consider that in the context of agriculture.

I am getting the nod from you, Madam Deputy Speaker, so I shall wind up my speech. Our farmers are going through monumental change, and I am pleased that the Government are investing in and supporting them. We have the ability to improve drastically on the existing model of the common agricultural policy and I look forward to being involved in that. We should show the ​public exactly how good our farmers are. We know about higher animal welfare standards, but it would be good if farmers were given an incentive to invite schoolkids on to farms to show them some of the great practices in which they are engaged.

I am happy to support the Bill.