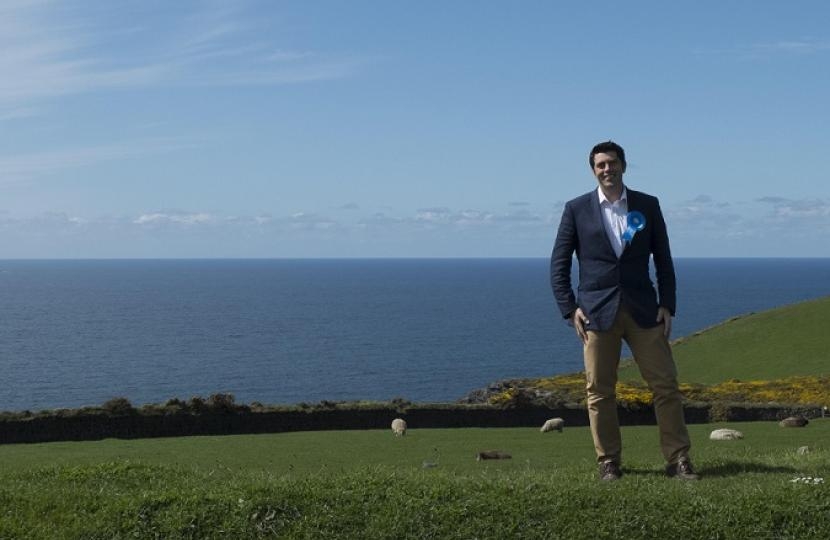 Scott Mann has highlighted the importance of protecting natural and heritage assets in North Cornwall including the South West Coast Path and Tintagel Castle during a debate in Parliament today on coastal erosion.

Speaking before MPs, Scott Mann said both assets must be protected from coastal erosion because they attract hundreds of thousands of visitors to the county every year, providing vital income to local communities.

"The South West Coast Path is 630 miles long. It is the longest national trail in the country, stretching from Minehead across the north coasts of Somerset, Cornwall and Devon, and heading back along the south coast all the way to Poole in Dorset. With breath-taking views and leisurely walks, the coast path is popular with locals, tourists, hikers and charity walkers alike. If coastal erosion progresses in Cornwall, the South West Coast Path will be one of the first things to fall into the sea, threatening numerous local economies.

"In 2012, the South West Coast Path Association released figures showing that walkers who used the path spent £436 million in the local economy. That was an increase of 15 per cent on the previous three years, and I have no doubt that those figures will have increased since 2012. It is therefore essential that we protect the coast path and this beautiful asset for generations to come."

Scott also said that Tintagel Castle was another vital asset in North Cornwall that must be protected because of the many visitors it attracts to Tintagel every year.

"Situated on Tintagel Island, the castle dates back to the 13th century and is linked to the legend of King Arthur. According to recent statistics, the castle was visited by a quarter of a million people in 2017—up by 70,000 over the past 10 years.

"That obviously creates huge tourism benefits for Tintagel and surrounding communities, and is an example of why we should take coastal erosion seriously."

Responding to contributions from MPs, Minister for Agriculture, Fisheries and Food and MP for Camborne & Redruth George Eustice said he recognised the rate of coastal erosion around the UK and why it's important that measures are in place to fend off the consequences of rising sea levels.

"Given my constituency, I understand people’s concerns. Cornwall has the longest coastline in England, at more than 1,000 kilometres, and the occurrence of coastal flooding is likely to increase threefold over the next 100 years. My constituency has both a north-facing and a south-facing coastline, and some of the exposed cliffs along the north coast have historical rates of coastal erosion of up to 40 metres in the past 100 years. They are likely to experience at least a further 40 metres of erosion in the next 100 years.

"To support our councils, the Environment Agency provides a national picture of what is happening on the coast. It has established national coastal erosion risk maps that provide a consistent assessment of coastal erosion risk around the country and set out a best-practice method for calculating that risk. The agency is also supporting a national refresh of shoreline management plans to ensure that they remain based on accurate information. There is also investment, which, inevitably, was a big feature of this debate.

"We put significant investment into coastal erosion prevention. In England, between 2015 and 2021, our plans will see £885 million invested in projects to manage coastal erosion and better to protect communities against flooding from the sea. At the same time as the Government made the decision specifically not to defend the entire coastline, they also made the important decision that any scheme with a positive benefit-cost ratio could still receive some Government funding to support partnership funding locally. We also established corporation tax relief for businesses to contribute to such projects.

"Our partnership approach means that schemes that would not have progressed in the past can go ahead if local funding can be found through the partnership model. Our £2.6 billion capital investment programme is expected to attract more than £600 million in partnership funding contributions on top of that."