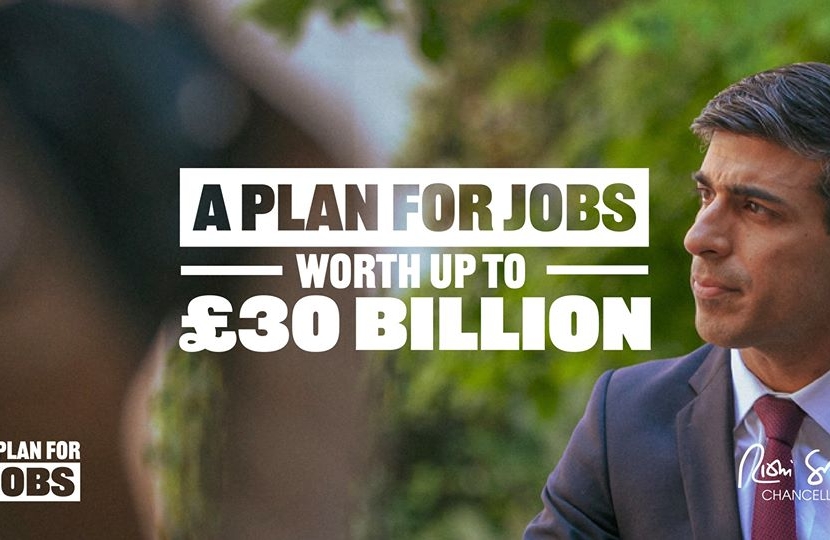 The Plan for Jobs set out by Chancellor Rishi Sunak today will provide much-needed support to businesses across the South West.

Since the start of the coronavirus pandemic, the government has said it will do whatever it takes to protect people and businesses from the immediate economic crisis. As part of this, hundreds of thousands of jobs in the South West have been supported through the Coronavirus Job Retention Scheme, allowing employers to put workers on furlough while the government supports their wages.

The Chancellor has now set out the second phase of the government’s response, focusing on jobs – supporting people to find the jobs that are out there, creating new jobs through investing in infrastructure and protecting jobs by revitalising the hard-hit sectors upon which many jobs depend.

As part of this, employers will be encouraged to retain staff who have been on the furlough scheme, with the government paying a one-off bonus of £1,000 for every employee who was furloughed and who is kept on until January.

Also included in the government’s £30billion Plan for Jobs:

The Chancellor’s Summer Economic Update, along with the New Deal for Britain announced by the Prime Minister last week, will benefit people and businesses across the South West.

Following our Plan for Jobs, the government will soon turn its attention to a third phase – a moment for rebuilding. The Chancellor will produce a Budget and a Spending Review in the autumn.

Chancellor Rishi Sunak said: “Throughout this crisis I have never been the prisoner of ideology. For me, this has never just been a question of economics, but of values.

“Our plan has a clear goal: to protect, support and create jobs. It will give businesses the confidence to retain and hire. To create jobs in every part of our country. To give young people a better start. To give people everywhere the opportunity of a fresh start.”

Scott Mann, MP for North Cornwall said: “This government is committed to standing by workers and good employers. For every employee brought back from furlough and employed until January 2021 the government will pay that business £1000 pounds. If employers stand by their workers, we will stand with them.”