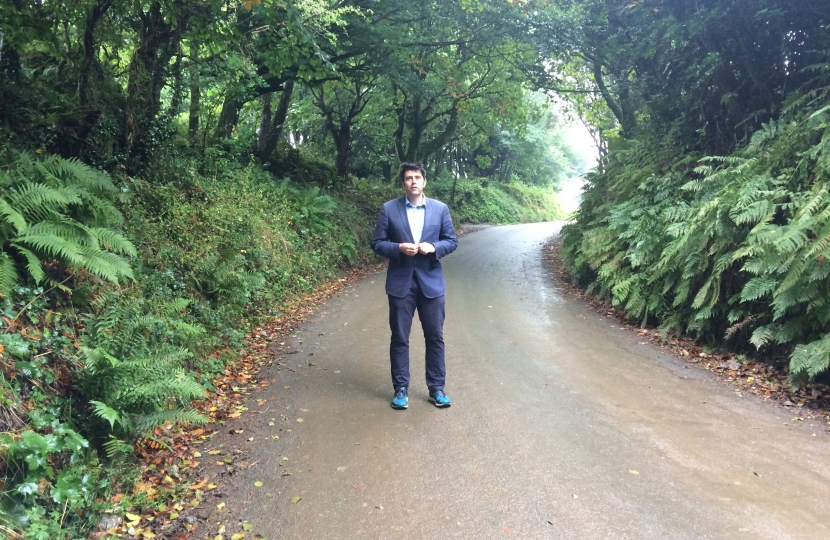 Scott Mann has called on Cornwall Council to reinstate school transport for pupils in Delabole who are faced with having to walk over three miles along dangerous country roads to get to school.

A campaign has been launched by parents in Delabole, calling on the council to continue their children's bus passes to Sir James Smith's School in Camelford, and Scott is also backing the campaign.

During a visit to Delabole, Scott said:

"I have expressed my disappointment to Cornwall Council over the removal of school transport for half the students in Delabole. The route children are expected to walk regulalrly floods and has no pavements, and they are expected to cross the road where the speed limit is 60mph. I am also aware that the council have rejected a second bid to have the road inspected.

"I have personally walked the route from Delabole to Camelford, which is very dangerous for an adult let alone a child to use, especially as the winter draws in with icy, dark mornings. The council needs to take this into consideration and understand that lives are at serious risk. I have publicly called on Adam Paynter, the Liberal Democrat leader of Cornwall Council, to walk the route so that he will understand the dangers of the road, but as of yet he has failed to do so.

"I commend Delabole Parish Council who have offered to pay for the children’s bus passes on a month by month basis to ensure that they are able to get the education they deserve, and I hope that this issue will to be sorted out by the council in due course."

Constituents who wish to stay updated on the situation can check the Delabole School Run Facebook page, which can be found here.