Scott gets on his bike to raise money for Poppy Appeal 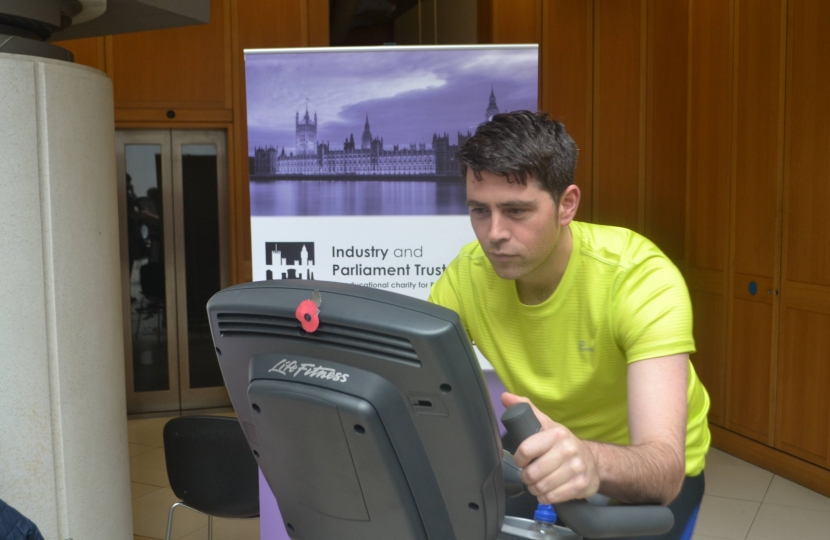 On Wednesday 4th November, Scott Mann, Member of Parliament for North Cornwall took part in a charity static bike ride in Parliament to raise money for the Poppy Appeal. Scott cycled 3.2Km in 5 minutes as part of the event being hosted by the Industry and Parliament Trust (IPT) which aimed to get parliamentarians cycling for twelve 12 hours straight

The bike ride took place from 08:00 to 20:00 in Portcullis House where over 70 MPs, Peers and Parliamentary Officials took it in turns to cycle as far as they could in 10 minutes in an effort to reach the top spot on the leader board. The event followed on from the success of the previous IPT static bike ride held in 2012 when money was raised for the Poppy Factory.

The money raised from the bike ride will help the Royal British Legion provide lifelong support for the armed forces community. The Poppy Appeal has the prestigious position of being the only charity to fundraise in Parliament.

“I was pleased to be able to support the Royal British Legion and the Poppy Appeal by taking part in the charity bike ride. By giving up just 10 minutes of the day, myself and over 70 colleagues helped to raise money which will positively affect the lives of thousands of people across the UK.

“I am grateful to the IPT for hosting today’s event. The work the IPT does is invaluable in bridging the gap between parliament and businesses and I am looking forward to working with them in the future.”

Commenting on the event, Nick Maher, CEO of the IPT added:

“I am extremely grateful to Scott Mann and everyone else who took time out of their busy schedule to take part in the bike ride. The support we received from staff and members of both Houses was fantastic and I know the money raised will go far in supporting those who need it most.

“While it was a novel way to raise money for charity, the work of the Royal British Legion is essential to the lives of thousands of families across the UK and it was brilliant to see so many Parliamentarians getting involved and enjoying themselves on the bike in order to raise money for such a worthwhile cause.”