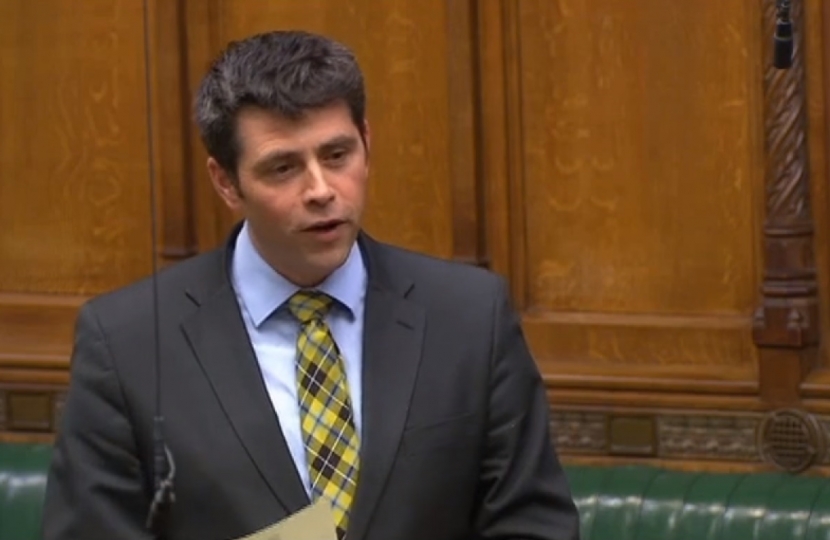 Good evening, Mr Deputy Speaker. Meur ras—thank you—for allowing me to speak in the debate. The people of Cornwall will be saluting you.

I come from a part of the country that has a very proud history and culture. Our population dates back to the stone age and is steeped in history and lore, particularly in mining and fishing. Some of our ancient traditions still exist today. Every year in Cornwall, people participate in the ancient tradition of hurling through the streets, and in the merry mornings of May, the ’Obby ’Osses descend through the streets of Padstow. In recent times, we have seen a huge resurgence in the sport of gig rowing. We are proud in Cornwall to be home to those historical cultural events, which are unique to our county.

Today, I wish to shine a spotlight on Cornish wrestling. I will, if I may, refer to Cornish wrestling in the Cornish tongue for the rest of the debate—I will be referring to wrestling as “wrasslin”. That is how we describe it in Cornwall. I have had a large number of media requests about this debate, which I was not expecting.

Cornish wrasslin bears no relation to the wrestling that people may have seen on television. It is not WWE. There are no ropes, nothing to jump off and no cage fights or tag teams. The sport of wrasslin in Cornwall sums up the Cornish very well. It is a game of power, skill and strength. Cornish wrasslin is a form of wrestling that has been established in Cornwall for several centuries. It is a unique sport that has witnessed a steady revival since the establishment of the Cornish Wrestling Association in 1920.

The history of wrasslin was recorded first in “The History of the Kings of Britain” in 1139, in which Geoffrey of Monmouth suggested that Corineus, the medieval legend, wrestled a Cornish giant named Gogmagog at Plymouth Hoe. Two Cornishmen were recorded in a poem of 1590 entitled “Poly-Olbion” at the battle of Agincourt, carrying carried a banner of two Cornish wrasslers in a hitch or a hold. In the 17th century, historian Richard Carew wrote of Cornish wrestling:

“Wrasslin is as full of manliness, more delightful and less dangerous” than hurling. I can just imagine two burly Cornishmen, with hands the size of shovels, striding out into battle at Agincourt, proud of their sport and proud of their county.

In more recent times, we have seen a mini revival. Both Devon and Brittany have a history of wrasslin, and they have competed with Cornwall in inter-Celtic matches. Cornish wrasslin is the oldest sport in the British Isles, and alongside hurling it is the oldest sport indigenous to Cornwall.

The objective of Cornish wrasslin is to throw the challenger from a standing position, with no grappling or holding on the ground. A bout begins when the competitors grab each other’s jackets by the collar, lapel or sleeve, in what is known as a hitch. To win the bout, ​the competitor must score a back. A back is scored by throwing the opponent on his or her hips or shoulders. There are four pins on the back of the jacket, and three have to touch the ground to score a back and win the contest. A single pin touching the ground only counts as one point but can be accumulated and scored at the end.

There are many different techniques and throws to defeat an opponent and score a back. Crooks and heaves are the most popular. Crooks are a variation of a trip, to catch an opponent off guard, while heaves are used by heavier, more powerful wrasslers to lift their opponent in the air and fling them on their back.

The wearing of canvas jackets is essential and makes gripping easier, and competitors also wear shorts and socks. One crucial thing to keep in mind is that strength is not the main contributing factor to wrasslin. Many techniques and moves can be deployed to get a back. In fact, competitors from Devon are said to have used more kicking, which has not always gone down particularly well with the Cornish.

One of the most famous encounters between wrasslers from Devon and Cornwall must surely be the great wrasslin bout of 1826. Any match between Devon and Cornwall was almost always hotly disputed and always bore a pridely grudge, and this was no exception. James Polkinghorne was due to meet Abraham Cann. James Polkinghorne was born in the St Keverne and was usually associate with St Columb, for it was here that he was the landlord of the Red Lion inn. He set forth to uphold the honour of Cornish wrasslin when he took on Cann the challenger.

The match was to find the champion of the west of England and it took place at Tamar Green in Devonport on 23 October 1826. The ultimate result has never been agreed and it remains a matter of controversy to this day. It was from St Stephens that James Polkinghorne set off, in his gig rowing boat, on a long trip with his brother to Tamar Green. Information about the controversy surrounding the event from the outset can be found in an article on the heyday and decline of wrasslin. In 1960, the late Leslie Jolly, a recognised authority on wrasslin, wrote in a Cornish gazette that he wondered whether Polkinghorne was the right person to take on the challenger Cann. Jolly’s grandfather, of Penscowen, St Enoder, was a renowned wrassler during the early part of the 19th century, and he made the case that Parkyn of St Columb Minor would have been a better representative. Parkyn had been champion for 20 years, but he was 52 and Polkinghorne a mere 38. Parkyn’s claims were supported by some involved in the sport, including in St Columb, but nevertheless it was Polkinghorne who eventually went across the Tamar.

Cornish wrasslin has not always had a good name. Before the sport’s governing body was founded, there were all sorts of things going on in Cornwall. The attraction of wrasslin brought about a bout in Bodmin. One of the competitors entered the ring and threw two roach men. That success was immediately followed by an attack by the Bodmin men, which led to a general riot. The contenders congested in a pugilistic style, the combatants armed themselves with bludgeons from the wooden rickshaw in the church town, and a fight ensued. Heads were laid open, teeth knocked out and the battlefield was quickly strewn with the maimed.​

During the 1930s and 1940s, several members of the Chapman family achieved great wrasslin success. Grandfathers, fathers and sons all fought. Many Cornish towns and villages held tournaments, and hundreds would turn up to watch the contests. The Hawkeys and the Warnes were also well-known wrassling families, but the most famous competitor of the day was the heavyweight champion, Francis Gregory of St Wenn.

Gregory had his first match when he was 13 and he was the youngest Cornishman to show his skills at the London Palladium in 1927. He represented Cornwall seven times from 1928 at the official Cornu-Breton championships. He won seven times, on four occasions in Brittany. Later, he moved north and changed his sport to play rugby league for Wigan and Warrington and was capped for England. Taking up professional wrestling, he became known as Francis St Clair Gregory, and in November 1955 he made his first appearance in a wrestling match shown on British television.

More recently, in the face of fierce competition and promotion, Cornish wrestling waned to a small group of stalwarts. To put a stop to the decline and help raise awareness, in 2004, the Cornish Wrestling Association became affiliated with the British Wrestling Association. Publicity increased and training sessions took place in Helston, Truro and Wadebridge. Those measures have helped wrasslin make a strong comeback. Based at St Columb Major, today Ashley Cawley is the current Cornish heavyweight champion. He is also the Cornish Wrestling Association’s public relations officer, while his uncle, Mike Cawley, is the association chairman. Ashley’s father, Gerry, came out of wrestling retirement and won two championships recently.

Over the summer months, the Cornish Wrestling Association runs tournaments in villages and towns across the duchy. They also feature at the Royal Cornwall Show. All ages are welcome to participate and there are several children’s categories. There is now a plaque in St Columb Major to commemorate the fight between Polkinghorne and Cann. The contests are overseen by three referees called sticklers, who award the points.

It is thought that Cornish wrasslin evolved the way it did because it is safer for wrestlers to land on their backs. The wrestlers are taught to grip tight and to avoid putting their arms down to soften the blow.

Wrestlers swear an oath in Cornish before wrasslin. The translation is:

“On my honour and the honour of my country”—

I think they probably mean Cornwall there—

“I swear to wrestle without treachery or brutality and in token of my sincerity, I offer my hand to my opponent.”

I will give the Cornish a go:

While it has been good to give the Minister a tour d’horizon of Cornish wrasslin this evening, I have some specific asks for her. Perhaps next time she passes through Cornwall, she would like to take me on in a bout of Cornish wrasslin. Given the current environment, perhaps the quickest way to sort out the leadership contest is to put everybody in a Cornish wrasslin ring and let them duke it out and find out who is the strongest contender.​

My first objective is to raise the profile of this wonderful traditional sport. I hope that we have managed to do that through the debate. Secondly, I seek the Minister’s support in getting help from Sport England to recognise Cornish wrasslin as a defined sport. That would allow Celtic tournaments between Brittany and Cornwall to continue. Sport England generously gave Cornwall £9,000 in 2012, and I hope that we can restore some of that funding.

I hope that I have provided some entertainment in talking about a sport that I care passionately about. I hope that the debate has showcased Cornish wrasslin.