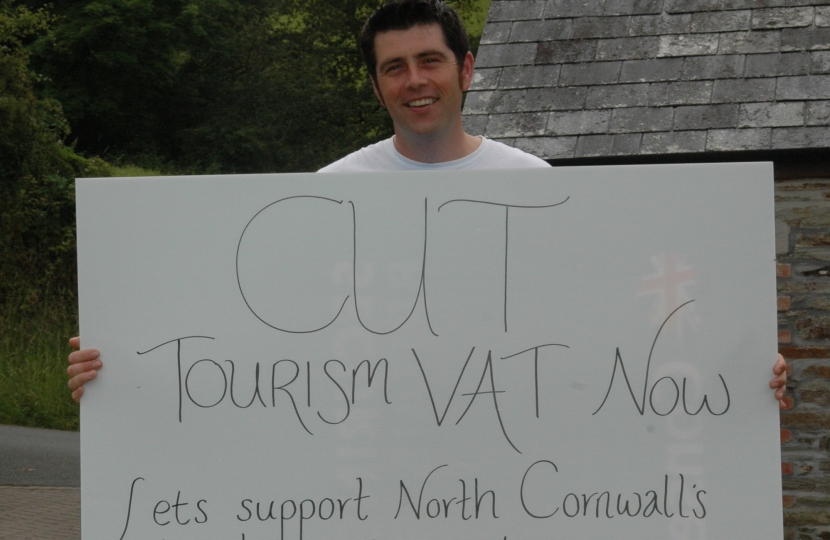 Enormous benefits to the Cornish economy would result from a cut in tourism VAT, according to Scott Mann, the Conservative parliamentary candidate for North Cornwall.

Pointing out that the economy of North Cornwall had been founded over centuries on farming, fishing and tourism, Mr Mann said: “It is becoming increasingly apparent as we talk to business owners in North Cornwall that they feel they are paying too much tax - and VAT in particular. I have been told about high business rates and many local firms need help to continue to grow their businesses. So I am fully committed to promoting the campaign to cut tourism VAT.”

In 2011 a survey called The Value of Tourism was published, estimating that a quarter of all employment in North Cornwall was tourism-based. Calling for a cut in VAT for all businesses that were based on  tourism, Mr Mann said there has been a surge in “stay-cations” . . . that is staying in this country rather than holidaying abroad.

Mr Mann, who was born and bred in Wadebridge and works there as a postman, explained there were many factors for this trend, not always exclusively to do with the weather. But it was fair to say that North Cornwall was a prime destination for people who wished to have “an iconic holiday at a reasonable price”.

He added: “As a tax-cutting Conservative I shall certainly fly the flag for businesses that want a reduction in VAT. We must fight our corner here in North Cornwall, and that involves doing everything we can to promote our area. I believe that slashing the VAT would be a big step in the right direction and I would urge everyone who would like this to sign up for the campaign.” Support for the campaign – and Mr Mann’s stance on getting holiday VAT slashed -  has already come from the tourism industry. Tina Evans Head of Padstow Tourist Information Centre said "We agree with Scott, most of the businesses we deal with are micro or small B&B's. 20% of their income represents a massive chunk and it can be crippling. In other countries like The Netherlands where their standard rate is 21% the government have made concessions and brought rates down to 6% for accommodation and attractions. I believe that the government should give tourism the priority it deserves."

If you wish to join the campaign you can visit cuttourismvat.co.uk follow @cuttourismvat on twitter or write to Scott at Suite 1 Coldrenick Farm Offices, Helland, Bodmin PL30 4QE