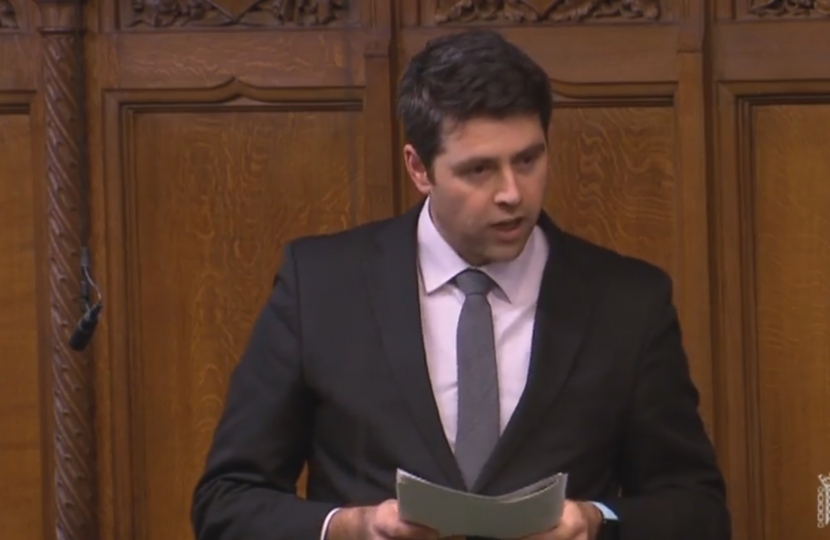 SPEECH ON THE EU WITHDRAWAL AGREEMENT

When we relinquished responsibility to the British people on 23 June 2016, the people, in the largest democratic exercise in this nation’s history, answered. They bravely rejected the easiest option, and now we, as legislators, must be brave, too. The great British resolve demonstrated, in a single act—an act that made me proud to be British—a will to self-govern and to push back against further integration. The British people did so not because of some fear of migrants, as some would have us believe, but in the belief and hope that our nation of Great Britain and Northern Ireland could unshackle itself and once again stride out into the world.

The withdrawal agreement and the deal represent a failure to truly comprehend the scale of the disfranchisement felt by many working people. For some, leaving the EU is not a priority, but the Government have misjudged the resolve of those who care deeply about it, and the instruction that they have given. The Prime Minister and the negotiators staked all their chips on immigration and fundamentally misunderstood the fact that the vote to leave was about more than that. It was an expression of self-will and self-government.

If we fail to listen to those concerns, we will make the gravest of errors. We will rightly be judged by our actions in the coming days, and I will not put my name to something that sells the UK short. Like many of my colleagues in this House, I have constituents who have never voted before but who saw the opportunity to take part in an historic democratic event. That huge but silent group of people felt that the systems and arrangements within the EU no longer worked for them, and they saw the referendum as a once-in-a-lifetime opportunity to use their voice for change. I will not ignore them.

Before I move on to the withdrawal agreement, I will raise some specific concerns about the implementation period. The north Cornwall sea is a productive mixed fishery, which has a number of fish that are known as choke species. Early next year, the discard ban will come into effect, and our Cornish boats will be tied up when they reach their quota limits, through no fault of their own.

The withdrawal agreement allows for the implementation period to be extended. Any extension would be devastating to an industry that has suffered for years under the deeply unpopular common fisheries policy. It would be impossible for me to ask fishermen my constituency to consider signing up to that when they have been under a 40-year stranglehold from Brussels. They need access and improvements to their rights now, not in two years’ time. Any extension of the implementation period would be completely unacceptable. We know where we want to

get to on fisheries but in the 585-page withdrawal agreement there are more pages devoted to the pension rights of EU civil servants than there are to fisheries. That has not gone unnoticed in places such as Cornwall.

I cannot support the backstop set out in the withdrawal agreement. No independent country could or should allow trade policy to be set by a third party. Far from offering control, the backstop would mean that the UK ceded control on an unprecedented scale. No businessperson would enter into a contract without a break clause or review date. No member of the public would enter into a mobile phone contract without a break clause or end date, in which the conditions could be changed while the contract was in place. Signing up to the backstop would place a sword of Damocles over this Parliament and Parliaments to come.

In short, it is my view that the backstop, if it is implemented, will be used as a stick with which to beat the UK and force us to accept whatever terms the EU wants to trade on. How can we return to the British people two and a half years since they gave us an instruction and offer them a relationship worse than the one we are already in? We can leave the EU by triggering article 50, but we will have no way of exiting the backstop.

President Macron has already made it clear that he wishes to exchange fisheries access for trade. The UK Government should not be in that position. I am told that if we have not reached a deal by the end of the implementation period, we will have a choice between extending the transition period and entering the backstop. That is like picking a favourite Kray twin. I am not in the business of doing that, and it is not what Governments in this country should be doing.

I have heard people say, “Let’s put this issue to bed. Let’s vote for this withdrawal agreement and get on with it.” If we vote for this deal, far from solving this issue for a generation, we will extend the implementation period, lose our sovereignty and enter a backstop with an arbitration panel. We will be talking about this issue for 10 years. People will rightly ask, “What’s your plan? What should the Government do?” We should mandate staged payments of our divorce bill to ensure we get a better trade outcome, we should put an end date on the implementation period, and we should either completely remove the backstop or, at the very least, time-limit it.

This is now a matter of trust. Do we trust the EU to follow through with delivering a trade deal after the Government have burnt through all their leverage? Do we trust the EU not to place us in a backstop we cannot get out of? These issues are too important to leave to trust alone; they must be made conditional in the legally binding text of the withdrawal agreement. It is a simple fact that, at this time of division in Parliament and the country, the British people need us to deliver on the specific mandate they gave us back in 2016.