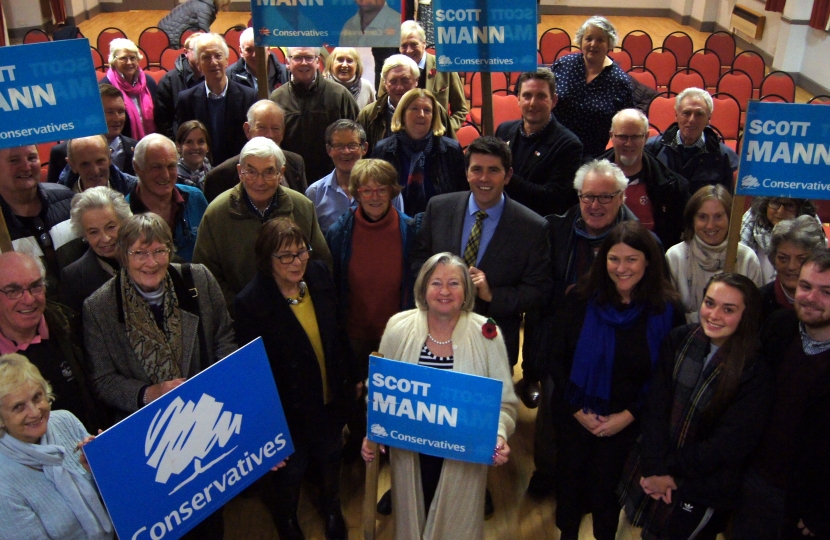 Scott Mann and the North Cornwall Conservative Association have officially launched their General Election campaign, looking to return a Conservative MP for the constituency for the third consecutive election.

Party members met at Wadebridge Town Hall to rally behind Scott, who has served as Member of Parliament for North Cornwall during the previous four and a half years, promising a positive campaign.

“Brexit will play a big part in this election, I am standing for the 60% of North Cornwall constituents who voted to leave the EU and who have been repeatedly told that they did not understand the question or didn’t realise what they were voting for. I am also standing up for the true democrats in our community, the people who tell me on the doors that they voted to remain but respect the referendum result.

“Beyond Brexit, the Conservatives have an exciting local programme. We have already balanced the school funding formula to ensure that North Cornwall’s children receive the same as those up country, and we have pledged £450m for enhanced local NHS services.

"I have had the great honour of being Member of Parliament for our constituency since 2015. North Cornwall is my home, it's where I'm from, and if I am re-elected, I will continue to put our local interests first."

Scott was initialy elected as MP for North Cornwall in 2015 and re-elected in 2017.

“Scott has already proven that he is a fantastic advocate for our North Cornwall community and has been a champion for the constituency where he was born and raised. Our association was pleased to re-adopt him unanimously and the members are fully behind his campaign.”