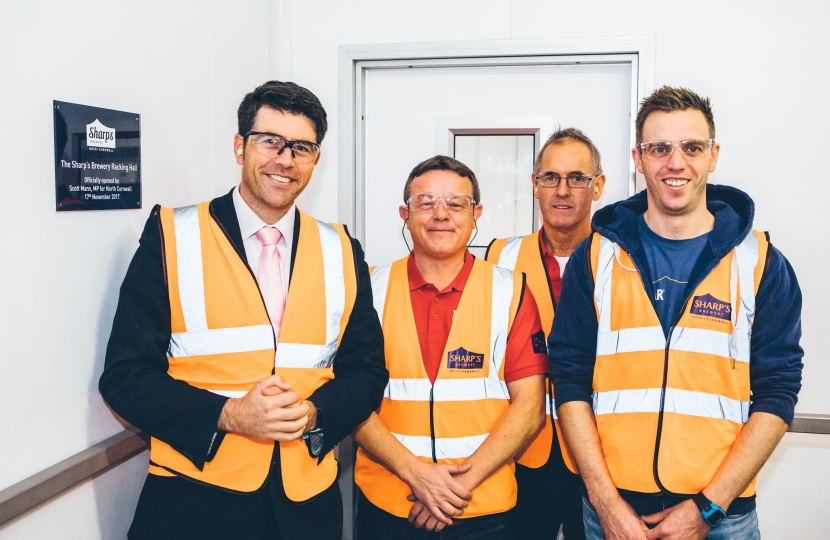 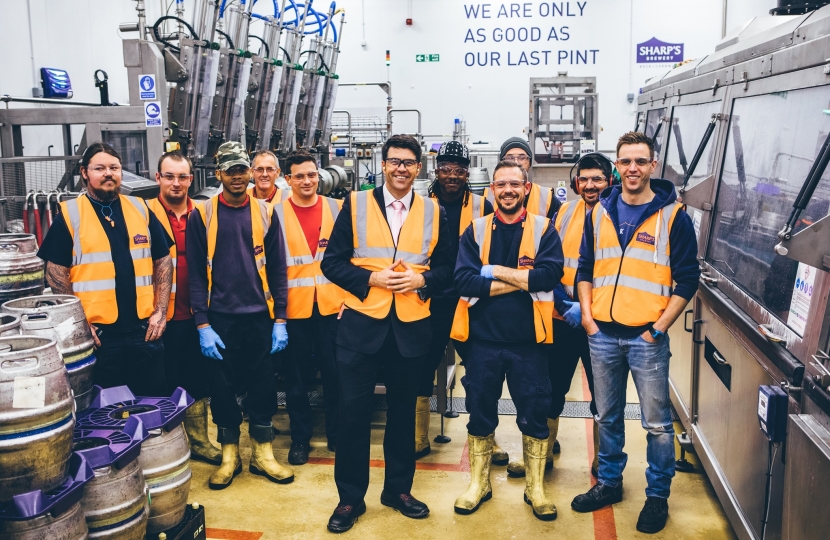 Scott Mann has officially opened a new £2.5 million laboratory and racking facility at Sharp’s Brewery in Rock which will deliver a boost to production of cask ale.

During his visit Scott met with the Sharp’s team and a tour of the new racking line, which has improved production efficiencies as well as increased output. To support the demand for Sharp’s award-winning beers, the new racking system now provides greater automation and operates five days a week producing 340,000 pints a day (340 casks per hour).

The efficient design and operations of the new racking has seen improved health and safety benefits and has enabled Sharp’s to decrease water usage by 17% and steam production by 25%.

"Sharp's Brewery is a fabulous example of what can be achieved in the food and drink sector in Cornwall. Its growth over recent years is a direct result of a top-quality product, investment in research and development and very effective branding.

"The new barreling line will increase production and boost its reach into more pubs and restaurants around the country."

The number of permanent Sharp’s Brewery employees has risen to 144, up from 135 in 2015, and Sharp’s has introduced a new apprentice scheme in conjunction with Cornwall College and is looking forward to welcoming and training more new recruits into the local brewing industry in future.

“Since Sharp’s Brewery was founded in 1994, the business has experienced phenomenal growth, way beyond our expectations, and as the largest brewer in the South West, investing in our brewery at Rock remains of paramount importance to us”.

"2017 was another positive year for Sharp’s, with our flagship beer Doom Bar remaining the UK’s No.1 selling cask and premium bottled ale brand. We also launched new additions to Sharp’s portfolio as we are always looking to innovate and excite our customers and consumers with new beers. This year we are introducing four new beers in the limited-edition range plus some smaller batch brews from our Pilot Plant and there are some other exciting projects in the pipeline."

As part of Sharp’s long-term commitment to maintaining world class beer quality standards, Sharp’s has re-modelled its Quality Lab to ensure that beer quality is of the highest standard as part of its continued commitment to its customers. With the investment in infrastructure refurbishment and technical equipment that will support the lab team, the new temperature controlled lab environment enables Sharp’s to achieve reliable and repeatable analysis and further increase quality assurance for all Sharp’s customers.