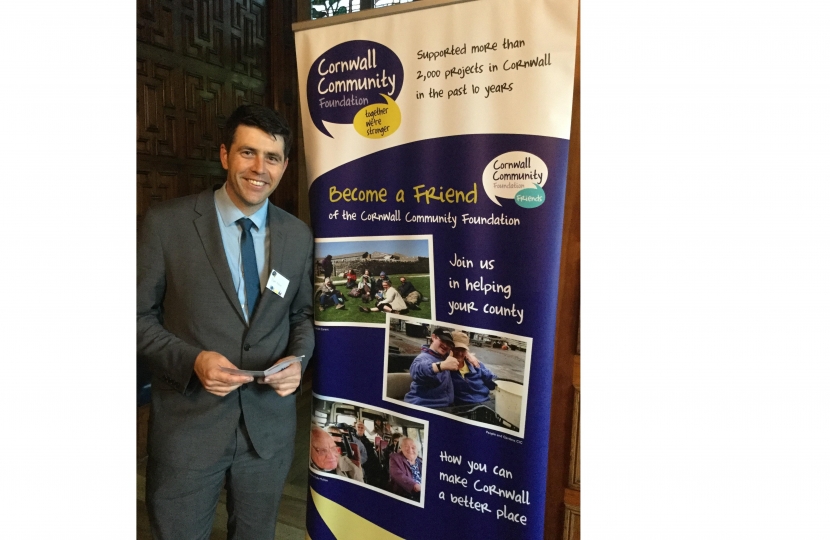 Scott Mann and The Cornwall Club attended a celebration in London to recognise the hard work by the Cornwall Community Foundation (CCF) on Wednesday, 11th May, which has recently helped save a charity nursery in Boyton.

Held at Two Temple Place – commented to be one of London’s architectural gems beside the River Thames – Scott and attendees, including broadcast journalist Alex Polizzi, were treated to food from Jamie Oliver’s Fifteen’s restaurant in Cornwall to celebrate the amazing work by the Foundation.

The CCF aims to improve the lives isolated, disadvantaged or vulnerable people in Cornwall and has expertise and local knowledge to help donors support local causes and charities.

The Foundation’s work enables people to make an impact through their giving, and identifies issues of importance to donors and facilitates investment to grassroots, front line, volunteer led organisations on their behalf.

The Cornwall Club was also set up to recognise the amazing work by the CCF and highlight the positive changes that the Foundation facilitates in the Duchy.

In recent weeks leading up to the celebration, Scott received some fantastic news that a charity nursery in Boyton had been given CCF funding after threatened with closure.

One of the highlights of the evening was the launch of the Second Home Owners Scheme, under which second home owners are invited to contribute the equivalent of one week’s rent to the Community Foundation.

Already the scheme has raised £30,000 for the Foundation.

One recent recipient of funding from the CCF was the Kingfisher Nursery in Boyton, which was threatened with closure after funding dried up.

However, after contacting Scott Mann, they were able to obtain funding from the CFF which has enabled them to continue looking after local children.

“We had a fantastic evening celebrating the work by the Cornwall Community Foundation. The CCF does great work in the Duchy and it’s right that we recognise its achievements.

“The Kingfisher Nursery contacted me last year with concerns that closure was possible because of issues with funding. My office and I assisted them and were able to direct them to the CCF, who then awarded them a grant.

“Without the CCF, the nursery could have closed which would have been very sad, but now with this extra money, the nursery can continue to serve parents and children in Boyton which I’m delighted about."

“We are delighted to be in receipt of a grant from the Cornwall Community Foundation. This money will help to support the running costs of our small nursery, where numbers are small, usually between 6 and 15.

“Like many small rural nurseries, without additional financial support we really struggle to meet all of our costs and be sustainable. Grants like these are vital if we are to survive.

“In particular, the grant will allow us to produce publicity materials to help us promote the nursery further with the aim of reaching more children from our area. Attracting more children helps us to have a more secure future and be able to offer a better service.

“We would like to take this opportunity to thank the Foundation for its support.”

“This is the third of our London events for people passionate about Cornwall. We are delighted at its success, and particularly for the launch of our Second Home Owners Scheme, under which second home owners are invited to contribute the equivalent of one week’s rent to the Community Foundation.

“Some of the proceeds will be going to help provide homes for locals through the Cornwall Community Land Trust. And every penny will stay in Cornwall.”