Scott shows support for pubs and breweries in North Cornwall 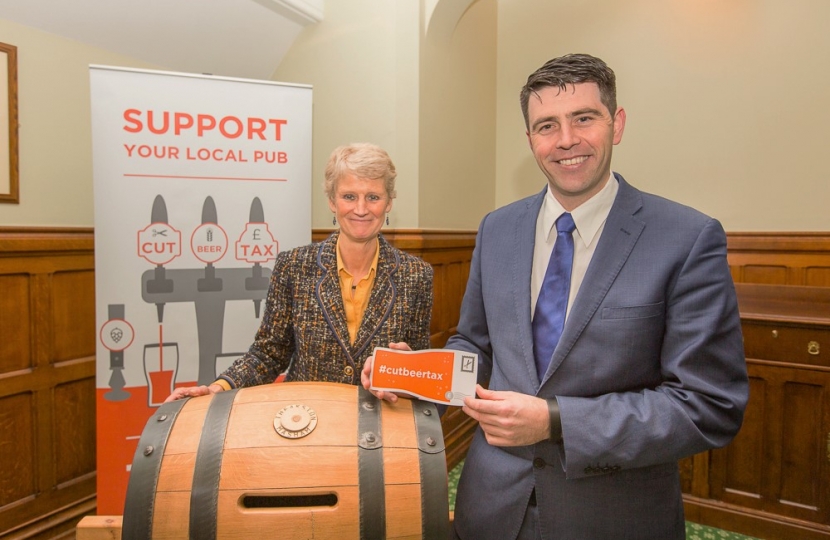 Scott Mann has joined with the British Beer & Pub Association, the Campaign for Real Ale (CAMRA) and the Society of Independent Brewers (SIBA) by sending a ‘Message in a Barrel’, calling on the Chancellor of the Exchequer to cut beer duty in the Budget on 16th March.

Scott posted his message in the handcrafted barrel, specially made by Yorkshire brewer Theakston’s, alongside almost 50 other MPs to add their voice to the campaign. The three cuts in beer duty over the past three Budgets have proved a massive boost for brewing and pubs in the UK, resulting in more affordable beer and millions of pounds of investment in pubs.

However, there is still more that can be done. Beer tax in the UK remains far higher than that neighbouring European countries. In Germany, for example, the rate of tax on beer is some thirteen times lower than here in the UK.

British beer drinkers pay almost 40 per cent of all the beer tax in the EU despite only drinking 12% of the beer. Brewing and pubs make a massive contribution to the UK economy. As a sector it supports almost 900,000 jobs across the country and contributes £22bn to UK GDP.

Beer tax cuts are also popular with the public – a recent YouGov poll for the BBPA shows that 72 per cent support with a cut or freeze in beer duty in the Budget.

“It's important that we keep this momentum going of supporting the beer industry. North Cornwall has seven breweries which employ local people and make some of the finest ales in the country.

“It's in breweries where traditional bespoke skills are taught to aspiring apprentices and it's in pubs where people come together because they lie at the heart of our communities while employing many local people. Another penny off beer duty and also cider duty will help both industries which have flourished in recent years in North Cornwall.”

“I am delighted that so many MPs have shown their support for cutting beer duty. It is the most direct, targeted way of helping pubs. Strong support from MPs always gives a real boost to our campaign - we have built a very strong case for further duty cuts to boost employment and protect pubs, as the industry still faces big pressures.”

Right: Scott attends the "Message in a Barrel" event in Parliament alongside Brigid Simmonds, Chief Executive of the British Beer & Pub Association