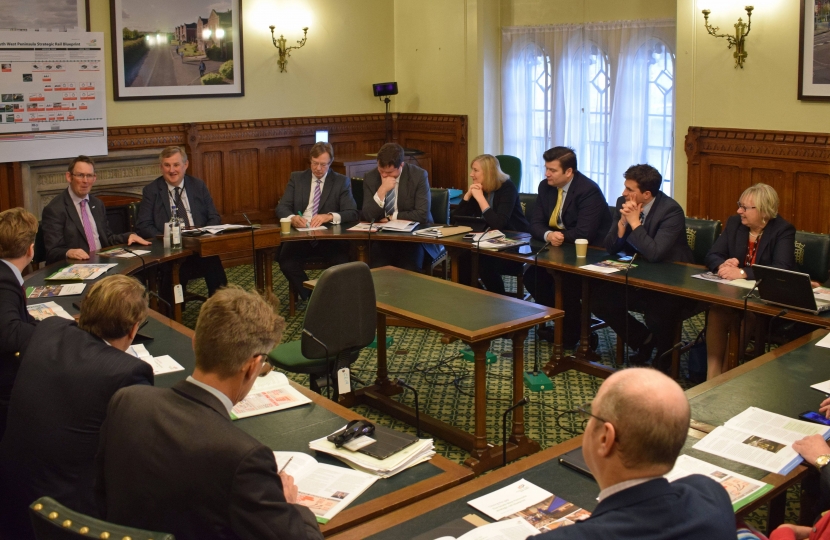 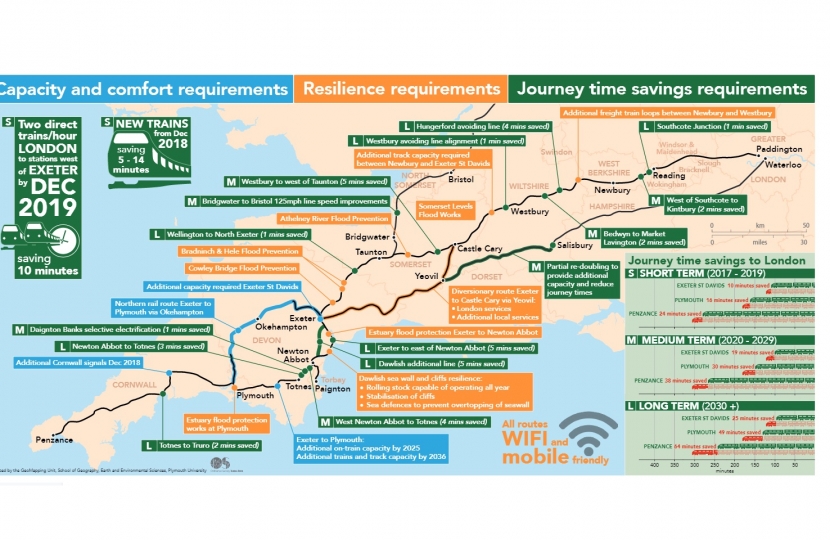 Scott Mann and fellow South West MPs have attended the launch of a vital and comprehensive report which outlines how the Government must improve and invest in the region's railway network.

The Peninsula Rail Task Force (PRTF) - which is made up of local authorities and Local Enterprise Partnerships (LEPs) in Cornwall, Devon and Somerset - was set up in early 2013 after flooding caused significant damage and delays to the region's railways. Shortly afterwards, the Dawlish sea wall partially collapsed during a storm which left the railway tracks suspended in mid-air. In response, the Government said it would address the vulnerability of the region's railways.

The PRTF has subsequently published a strategic report which outlines a blueprint of what needs to be done to make the South West's rail network more resilient and reliable, faster and better conected, and bigger and better. Each of these has short, medium and long term goals with estimated funding requirements.

Amongst the various improvements outlined, the PRTF have identified Dawlish resilience as a short term priority which Network Rail are already working on. The PRTF says it wants to see £270m to start the critical resilience work, and last week the Transport Secretary announced an initial £10 million to draw up the resilience proposals to protect the Dawlish mainline from landslides and storms.

On journey times and connectivity, the PRTF want to see a £1.5bn investment to cut 26 minutes off the journey time between London Paddington and the South West Peninsula and two direct trains per hour between London and Plymouth.

In particular, Scott has welcomed the PRTF's recommendation that a 'Northern Line' should be considered between Exeter and Plymouth via Okehampton. This would open up more communities in North Cornwall to transport links and would provide the Peninsula with an additional railway line to create greater resilience and reliability.

“I’m so pleased to see the Peninsula Rail Task Force publishing its strategic report today on what needs to be done to modernise our railways in the South West.

“This report has had widespread support from local authorities, LEPs, MPs, the Department for Transport, rail operators and Network Rail in order to establish what needs to be done to make the South West’s rail network fit for the future.

“Our railways need to be faster, more efficient and more resilient. We need more capacity and more options for residents and tourists alike, particularly in Devon and Cornwall which suffer from poor connectivity.

“Making the Dawlish sea wall more resilient is of absolute importance because it carries the only mainline serving Devon and Cornwall. We cannot see a repeat of cliffs collapsing on to the line or the sea wall crumbling into the ocean.

“That is why I also welcome the PRTF’s goal of reinstating the ‘Northern Line’ between Plymouth and Exeter via Okehampton. This will open up more communities in central Devon and North Cornwall to transport links and will also act as an additional line to increase overall capacity and to ensure that trains can get in and out of Cornwall without potential storms or landslides being an issue.

“My collegues and I been actively pushing the Government to consider a ‘Northern Line’ and ideally I would like to see it delivered in a more ambitious timeframe than what is laid down in the PRTF’s report. I will therefore continue to lobby the Government on this to make sure that Devon and Cornwall get an additional rail line.”

In summary, the PRTF are calling for the following:

• Invest £284m in resilience, including commencing the securing of the main rail line through Dawlish and Teignmouth

• Invest £2.5m in GRIP 3 options for the diversionary route East of Exeter

• Increase frequency to 2 direct trains an hour from Plymouth to London in the new franchise, reducing journey times by up to 10 minutes, whilst at least maintaining existing services

• Work with the rail industry to maximise the benefits of the new trains from Dec 2018 and invest £25m to make our journeys more productive through on board travelling office, media and mobile/Wi-Fi connectivity.

• Invest £1.5bn to reduce journey times by up to 14 minutes to Penzance, through infrastructure improvements, partial electrification and franchise renewals

• Invest £358m to improve capacity and comfort through new rolling stock, infrastructure enhancements and phased opening of the Northern Route

The full report can be found here.