Petition for Camelford Bypass presented to Parliament by Scott Mann 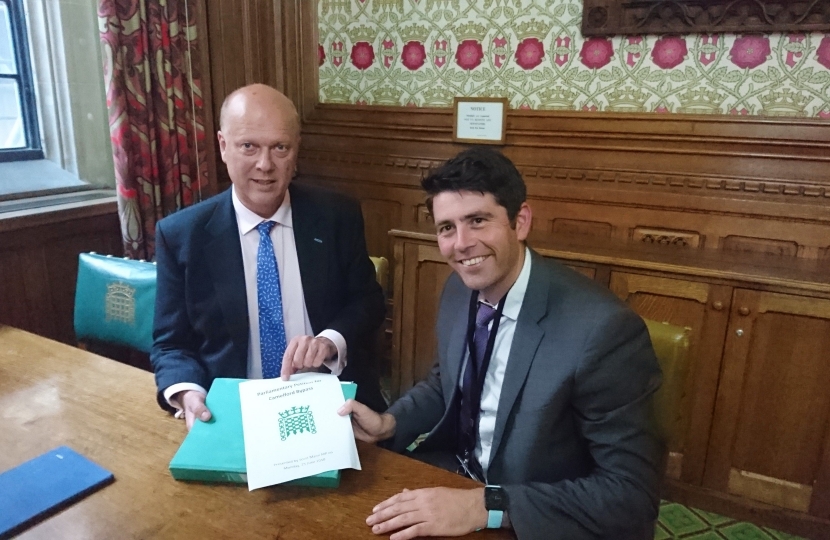 A petition calling for a bypass around Camelford to address air pollution and spur economic growth has been presented to Parliament by local MP Scott Mann.

Following an options report by CORMAC which concluded that a bypass was the best long term solution for the town, Mr Mann launched a petition last year calling on the government to recognise the report and the concerns of local residents who want cleaner air and an end to congestion.

Presenting the petition in the House of Commons on Monday, Mr Mann noted that during the past four years of knocking on doors in Camelford, the need for a bypass is the number one issue raised by local residents because of air pollution and the potential to unlock economic growth in the town.

After Mr Mann presented the petition, he met with the Transport Secretary to further discuss the need for a bypass.

“I launched my petition in Camelford town centre back in November and it received a great level of support. Many people were signing it and taking extra sheets home for their friends and family to sign as well. It is clear that this is the biggest local issue, and one which I am determined to address.

“A bypass is essential not only for air quality and public health, but for the economy. It will allow traffic to navigate the area faster and for the town to be much more attractive to businesses that want to invest.

“The A39 has been provisionally designated as a major road in the Department for Transport’s proposed Major Roads Network, which means it could be eligible for improvements worth tens of millions of pounds. I want us to be off to a running start when the funding pots for the MRN are officially launched, and the next step is for Cornwall Council to work up a business case which can be presented to the department.”

The petition secured 743 signatures from local residents and North Cornwall constituents which will be responded to by the Department for Transport within the next two months.

The text of the petition reads:

“The Petition of residents of North Cornwall,

“Declares that the request for a bypass for Camelford be accepted; further that an options report has been undertaken, which looks at different ways of addressing the congestion and air quality; further that a bypass is thought to be the best long term solution to the issues which locals are concerned about; and further the economic benefits that a bypass will bring to Camelford and North Cornwall. The petitioners therefore request that the House of Commons urges the Government to support the earliest opportunity for a bypass for Camelford to help ease pollution and congestion.

“And the petitioners remain, etc.”