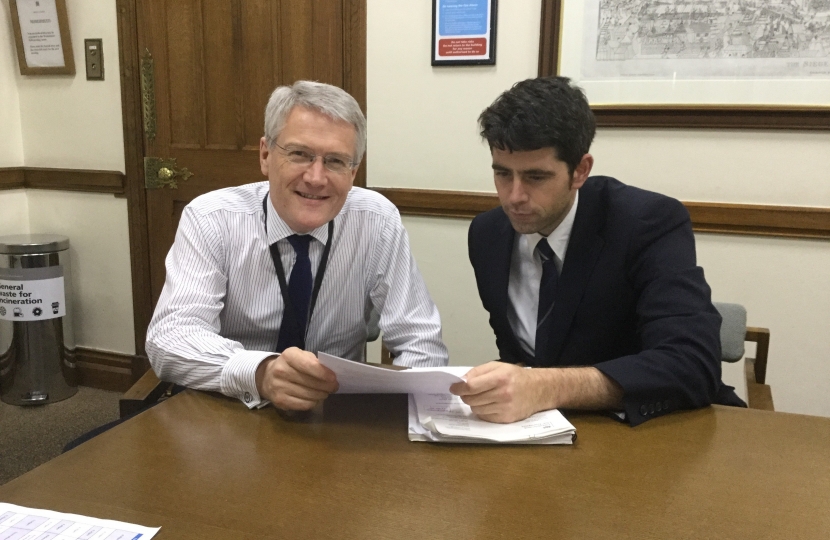 Scott Mann has taken the concerns of Camelford residents to Westminster by meeting with the Roads Minister to discuss a bypass for the town.

A number of local residents have contacted Scott about traffic congestion, noise and air pollution because of the bottle necks in the town centre. The effects of traffic congestion have also been compounded by the increase in vehicles when the A30 has been closed for ongoing dualling works.

Writing to the Roads Minister Andrew Jones back in October, Scott described how there was “great appetite” in the town for a bypass which would not only solve congestion issues, but would also unlock more economic growth in the town.

In both his letter and during this week’s meeting with the Minister, Scott explained how a task force had been set up in Camelford to address air pollution and how a Neighbourhood Development Plan was also being worked on which will hopefully include a bypass.

Following his meeting in Parliament with the Roads Minister, Scott Mann said:

“Although the A30 is the busiest route through North Cornwall, it is actually the A39 which acts as the spine of the constituency, running between Wadebridge in the west and Bude in the east.

“A lot of traffic uses the A39 and Camelford sees a significant number of cars passing through every day as they pass through North Cornwall.

“Camelford town centre was not designed to cope with this much traffic and a bypass is desperately needed to address congestion, safety issues, noise and air pollution. A bypass would also unlock Camelford’s great economic potential, because it would make the town more attractive to business and investment.

“I had a very constructive meeting with the Roads Minister this week and I have discussed the idea with Cornwall Council officials as well.”

In light of the Chancellor recently announcing billions of pounds for road infrastructure schemes, Scott has also written to Philip Hammond to ask if central government funds could be used to build a bypass. Scott is seeking to meet the Chancellor as well as the Cornwall & Isles of Scilly LEP which disperses central government funds in Growth Schemes.

A bypass was close to being built in Camelford in 2004 after planning permission was granted, but a lack of funding meant that the permission lapsed and the bypass was no longer viable.