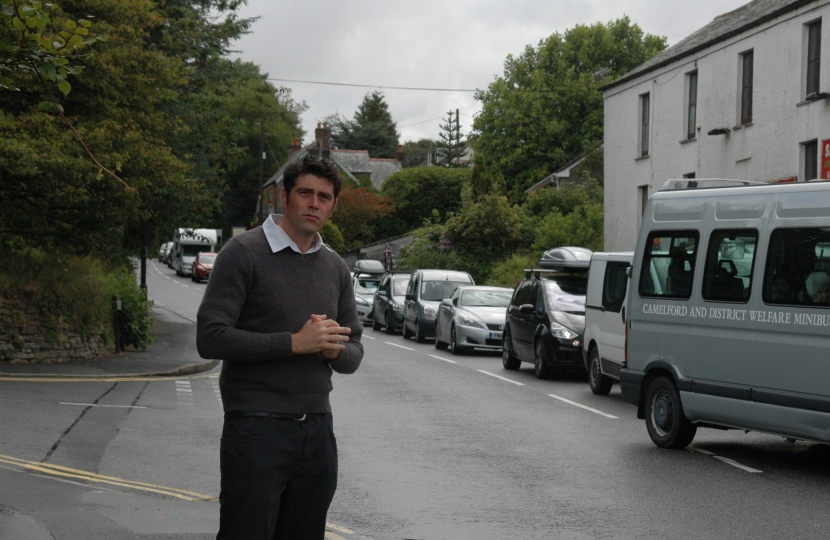 Scott Mann has continued his campaign to address traffic congestion and air pollution in Camelford after making representations to Cornwall Council and government ministers.

Hot off the heels of the Government announcing £26 million for Cornwall’s roads for 2017/18, Scott Mann wrote to Councillor Bert Biscoe, who is the Portfolio Holder for Transport at Cornwall Council, urging him to fund road improvements in the town.

The £26 million bonus is made up of three components:

•    £20m for road maintenance from the Highways Maintenance Block;
•    £4m for road improvements from the National Productivity Investment Fund (NPIF);
•    £2m from the Pothole Action Fund to repair 35,000 potholes.

In his letter to Cllr Biscoe, Scott Mann asked him to outline any preliminary plans for the £4m from the NPIF and urged him to fund road improvements in Camelford to address congestion and air pollution.

“…Camelford is experiencing large amounts of congestion with the A39 running straight through its town centre. This is causing both noise and air pollution, with the latter of particular concern for peoples’ health.

“Ideally the town is in much need of a bypass – both to solve traffic issues and spur economic growth – but in the short term, action does need to be taken to relieve congestion in the town along the existing main road. I would therefore like to request that Cornwall Council use this £4 million from the National Productivity Investment Fund to implement measures that will address congestion and air pollution concerns in the town."

Scott added that the money must be spent on “worthwhile projects which the residents and taxpayers of Cornwall actually want and need without unnecessary wastage”.

The MP for North Cornwall has previously criticised Cornwall Council in the past for the amount of money spent on implementing a bus lane in Truro which was scrapped after just 21 days (estimated to cost £60,000), and approximately £100,000 spent on Italian trees in Pool which died.

Following his letter, the MP then brought the issue to government ministers in the House of Commons on Thursday, 19 January.

Addressing ministers from the Department for Environment, Food and Rural Affairs (DEFRA), Scott Mann praised the work of Camelford Town Council and local residents for their work in tackling air pollution, and asked if the department would help with these efforts.

In response, environment minister Dr Therese Coffey said that “national government have their part to play in finding solutions to tackle local congestion issues, but so too does local government”. She added that the department would work with Scott to address concerns in Camelford.

“The residents of Camelford clearly want something done about traffic and air pollution. The town got so very close to getting a bypass in 2004 and the case for one now is even stronger.

“We do have to be realistic however and recognise that a bypass is a long term solution. That’s why in the meantime I want to see improvements made to the existing roads so that congestion and air pollution can be addressed.

“I hope that Cllr Biscoe sees merit in my request and that some of this £4m is ring fenced for Camelford.”