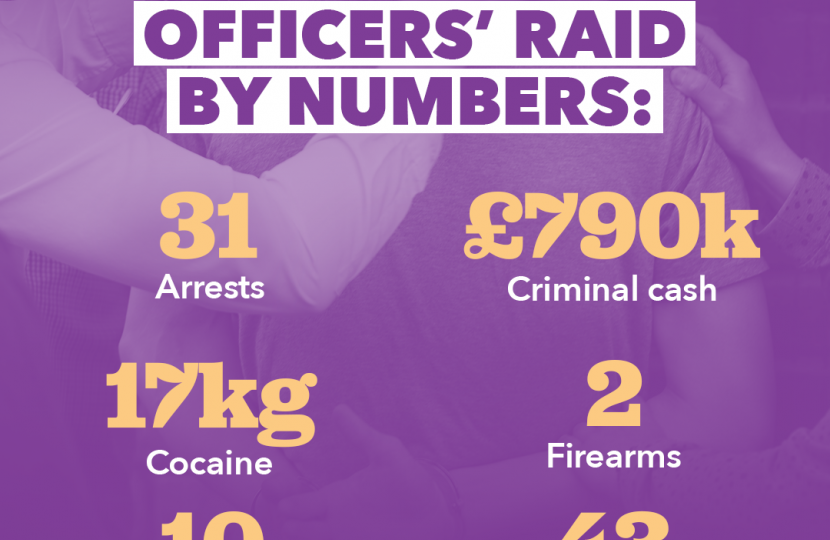 More than 30 serious criminals have been arrested across the South West as part of the UK’s biggest ever law enforcement operation.

Operation Venetic has seen entire organised crime groups dismantled, with almost 750 arrests and the seizure of £54million of criminal cash, 77 firearms and more than two tonnes of drugs to date.

As part of the major operation, the South West Regional Organised Crime Unit (SWROCU) has arrested 31 people and seized £790,000 in cash, 10 EncroChat phones and 23kg of cocaine and other drugs.

The operation, run by the National Crime Agency (NCA) with help from police forces across the country, involved the infiltration of an encrypted global communications system used by criminals for coordinating and distributing their illegal goods.

Scott Mann, the Conservative MP for North Cornwall, praised the efforts of the NCA and South-West police officers in taking criminals, weapons and drugs off our streets.

He said: “This government will be tough on crime and this major operation shows our agencies will not allow criminals to bring weapons and drugs to our streets.

“I'm sure that constituents across North Cornwall will join me in thanking Devon & Cornwall Police for their part in this operation to help keep our streets and families safer.

“This is not the end of the battle against crime, but it is a major success and will send the message we will continue to hunt down criminals and their gangs who are intent on making money and bringing fear to communities through their illegal activities.”

Home Secretary Priti Patel said: “This operation demonstrates that criminals will not get away with using encrypted devices to plot vile crimes under the radar.

“The NCA’s relentless targeting of these gangs has helped to keep us all safe. I congratulate them and law enforcement partners on this significant achievement.

“I will continue working closely with the NCA and others to tackle the use of such devices – giving them the resources, powers and tools they need to keep our country safe.”

I am sure that by now you will be aware that HRH Prince Philip, Duke of Edinburgh, has passed away.

His life of public service will be remembered for many years to come and my thoughts are with the Queen at this difficult time.