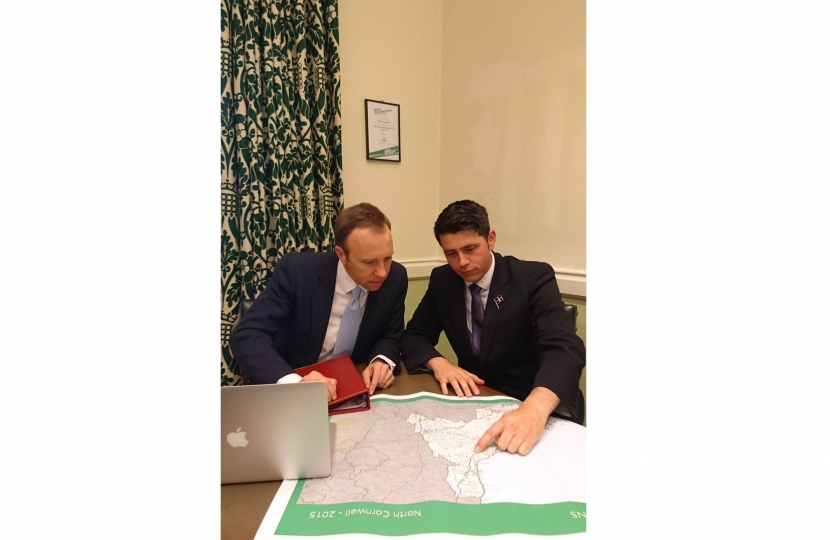 North Cornwall MP Scott Mann has met with a government minister to discuss broadband in North Cornwall and highlight the areas which have not yet benefitted from the rollout of superfast broadband.

Meeting the Digital Economy Minister, Matt Hancock, in Parliament, Scott used a map of the constituency to show the rurality of North Cornwall and the challenges facing homeowners and business who need a fast broadband. Scott also told the minister about the not-spot map which is used to plot the location of constituents who have poor broadband or who want a superfast connection.

"It was very good to meet with the Digital Economy Minister, Matt Hancock, to discuss broadband coverage in North Cornwall and the rollout of superfast broadband.

"The Government is investing millions of pounds into superfast broadband rollout, as it's vital that we connect up our rural communities so that they are not left behind. "By 2020, the 10MB Universal Service Obligation will also be in place which will give everyone a legal right to expect at least 10Mbps of broadband.

"My office also has a not-spot map which plots constituents who have poor broadband or who want superfast. It has been very useful, so please don't hesitate to get in touch if you have similar issues."

Superfast Cornwall is currently the organisation responsible for overseeing the rollout of superfast broadband alongside BT Openreach. Between 2011 and 2015, it achieved 95% coverage and is now running a new programme to cover at least 8,600 premises of the 30,000+ without superfast broadband.

As MP, Scott has consistently lobbied for more money for superfast rollout and a change in law so that new homes have to have a superfast connection. In autumn last year, the Government announced it had changed building regulations so that a new or renovated building must have internal cabling which can carry a superfast broadband connection.

In December it then announced £440 million to rollout superfast broadband to another 600,000 homes. Read more here.

To see if your property is included in the current rollout by Superfast Cornwall, click here.