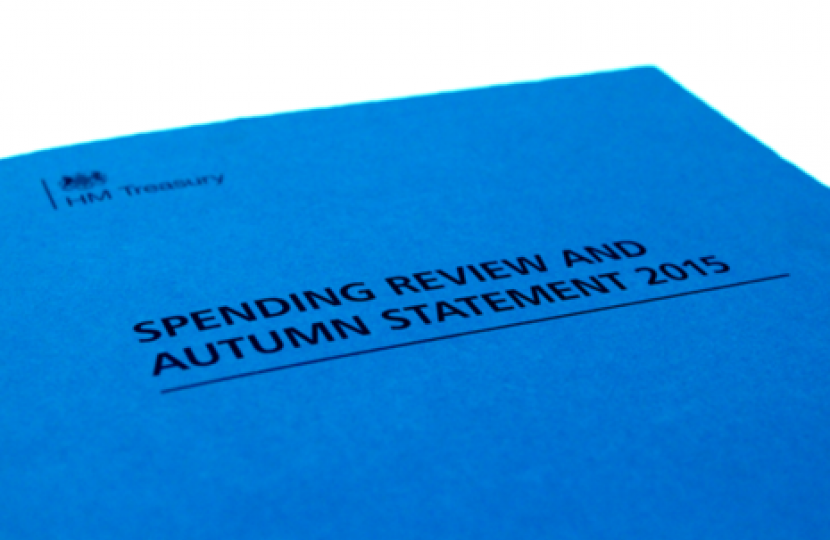 Scott Mann has welcomed George Osborne’s Autumn Statement which has announced significant policies which will help the people of North Cornwall and the rest of the Duchy, notably a 3% rise in stamp duty for second homes and no cuts to Police budgets.

Among them was the decision to abandon the proposed changes to Tax Credits. Although a new National Living Wage is being introduced in 2016, many MPs including Scott were concerned that the rise in wages would not compensate for the reduction in Tax Credits for some families and leave them worse off.

Scott subsequently gave a speech in the House of Commons asking that the Chancellor mitigate any negative effects.

“I’m pleased that the Chancellor has listened to myself and colleagues on this important matter. I was looking forward to hearing what proposals George Osborne was going to bring forward in the Autumn Statement, and he has delivered a result which best serves the people of North Cornwall. Although I support the reform of welfare, my argument has always been that it should match the increases in wages so that no-one is left worse off.”

Leading up to the Statement was rumour that Police budgets would be cut. However the Chancellor has announced that these will not be cut, and the Police needn’t fear potential cuts to officer numbers that was first speculated. This comes ahead of an announcement by the Home Office that a proposed funding formula has been shelved until it is re-calculated. Scott and Cornwall Conservative colleagues, and the PCC Tony Hogg, campaigned for fairer police funding and also asked the Police Minister to re-address the new formula.

Scott has also been campaigning to make school pupil funding fairer, with the current situation seeing children from poor backgrounds receiving up to 50% less funding than a child in another school but with identical circumstances.

The Government will launch a detailed consultation in 2016 to implement the new formulae.

“This is fantastic news. After meeting with head teachers up and down North Cornwall, and making representations to the Education Secretary, Ministers, and David Cameron to make funding fairer, it’s great to hear that a proper formula will be implemented to bring equality to school funding which will greatly benefit small rural schools in North Cornwall.”

Two other policies that will specifically help North Cornwall are the 3% rise in stamp duty for second homes and buy-to-let homes, and the extension of the cuts to household water bills. The Government will spend over £150 million in cutting 750,000 peoples water rates by £50 a year. The 3% rise in stamp duty will raise an additional £1 billion which will be invested in communities to build more homes, particularly in Cornwall which has many second homes.

“Although I welcome people to live in Cornwall and enjoy our beautiful surroundings, the detrimental impact that second homes have had on some of our communities cannot be understated. It is important that our housing policies are shaped to support the working population within Cornwall and any additional taxation which stops new houses in Cornwall becoming second homes is welcomed.

“This Government is passionate about building homes and getting people on the housing ladder, and policies such as this will help do that.”

Scott summed up the Autumn Statement by saying:

“The Conservatives are the party for working people, and this Autumn Statement proves this as well as the fact that as a Government, it listens to the people. This Government will build more homes, keep taxes low, and eradicate the deficit by 2020, leaving the country with a surplus and a strong economy which is paramount to having a strong NHS, strong National Security, and a strong economy.”