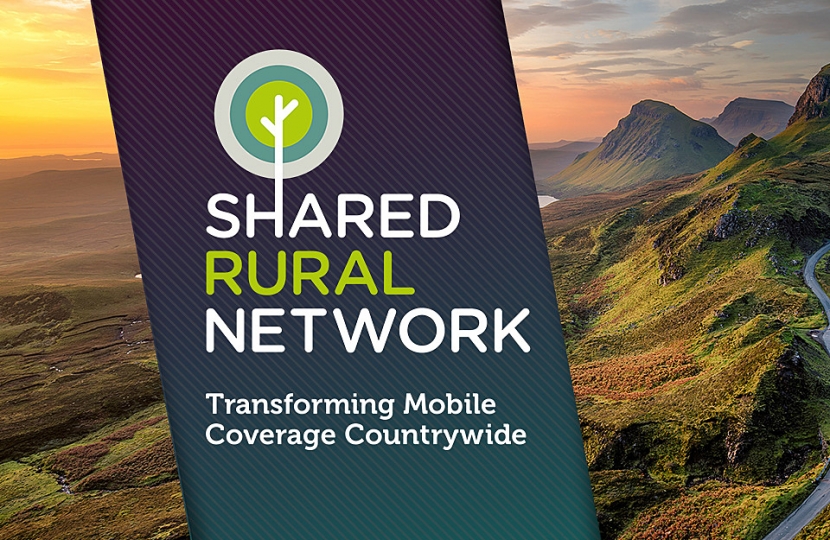 Ministers and bosses from mobile network operators will meet this afternoon to sign a £1 billion deal to make poor and patchy rural phone coverage a thing of the past.

The world-first deal will be a huge boost for people across the country in rural areas and will deliver strong 4G coverage irrespective of what network provider people use.

The ambition is to make sure everyone can benefit from fast services on the go - from those running small businesses to people shopping or booking travel online to speaking to friends and family. It will spur economic growth and close the digital divide across the country through better connectivity.

The Shared Rural Network (SRN) is a deal with EE, O2, Three and Vodafone investing in a network of new and existing phone masts, overseen by a jointly owned company called Digital Mobile Spectrum Limited, they would all share.

It will provide guaranteed coverage to 280,000 premises and 16,000km of roads. We can also expect some further indirect improvements over time, including a boost to ‘in-car’ coverage on around 45,000 km of road and better indoor coverage in around 1.2m business premises and homes.

The deal will lead to increases in coverage in some areas by more than a third, with the biggest coverage improvements in rural parts of Scotland, Northern Ireland, and Wales.

It means all four mobile network operators will deliver 95 percent combined coverage across the whole of the UK by the end of 2025 and consumers can rely on their own provider’s network wherever they are.

It follows moves by the government to improve digital infrastructure by making it easier and cheaper for the private sector to deploy faster broadband to the most commercial areas of the country, new legislation to make it easier for telecoms firms to connect blocks of flats, and plans to mandate gigabit-capable connectivity in new build premises.

The government has also pledged £5 billion to subsidise the rollout of gigabit-capable broadband in the harder-to-reach areas of the country.

This is an important milestone to level up the country, improve people’s lives and increase prosperity across the length and breadth of our United Kingdom.

High-speed mobile connectivity is a central part of modern life whether you live and work in a city centre or in the countryside. Building out fast and reliable access to 4G across the country is a national mission and we’re playing a leading role, collaborating with government and the other mobile network operators in the UK, to make this happen. The Shared Rural Network is something we can all be proud of.

I’m proud of the work we’ve done to secure the Shared Rural Network agreement, ensuring customers living in rural areas will be able to get the fast and reliable coverage they need and deserve. The collaboration between the industry, government and Ofcom should be seen as a leading example of how to deliver infrastructure investment and we look forward to now rolling the Shared Rural Network out as quickly as possible.

The Shared Rural Network is a game-changer for the country with coverage from each of the four operators expanding to at least 90% of the UK’s geography.

A rural postcode should not be a barrier to receiving a decent mobile signal. Together, we have created a programme that is unmatched anywhere in the world. It will mean an end to mobile ‘not spots’ for people in the more remote areas whether they are at home, at work or on the move. We will now get on with the job of delivering it.

The Shared Rural Network is fantastic news for people who live and work in our beautiful countryside. In making it happen we’ll listen to rural communities and strive to maximise the benefits it will bring.

The Shared Rural Network partnership between the mobile operators and the government is unprecedented in both its scope and its ambition. Mobile UK looks forward to supporting the delivery of the programme in the coming years.

Strong competition promotes industry investment in mobile coverage in dense urban areas, but rural areas have fewer potential customers and have not seen the level of investment needed to provide good coverage.

The new deal means the four networks have committed to legally binding contracts and investing £532m to close almost all partial not-spots: areas where there is currently only coverage from at least one but not all operators.

This investment will then be backed by more than £500 million of government funding to eliminate total not-spots: hard-to-reach areas where there is currently no coverage from any operator. This will provide new digital infrastructure in total not spot areas not commercially viable for the operators.

The legally binding coverage commitments will be enforced by Ofcom which will have the power to issue fines up to 10 percent of an operator’s gross revenue if they fail to meet their targets.