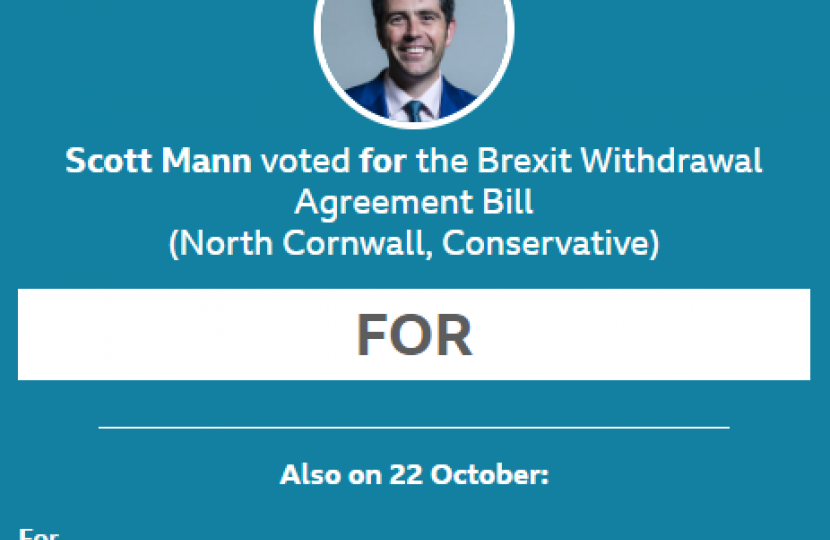 I am very disappointed that the House voted to block Brexit legislation moving forward after we had finally found a consensus on a deal.

It is obvious to me that many colleagues in Parliament simply want to disrupt and block any attempt to leave the European Union and therefore ignore the votes of 17.4 million people. Despite what they say there will never be a deal good enough for them. It would be better for everybody if colleagues simply admitted that they have no intention of allowing us to leave the EU and wish to remain under any circumstances.

Prime Minister Boris Johnson has my continued support and I will continue to work towards leaving, with a deal, at the earliest opportunity. Implementing the result of the 2016 referendum and leaving the EU with a deal which respects the result is the outcome which most of my constituents have told me they would like to see. They do not want to see further disruption and delay to their lives and businesses, especially going into Christmas.

The Surrender Act legally obligates the UK to accept a delay, and Downing Street is waiting for the EU to deliver its terms to us. However, it is worth remembering that the EU did not desire the delay as they wanted this deal to work. I believe that Europe would also like to see the Brexit issue finally concluded.

A further delay will cause deep frustration to businesses and people across North Cornwall, and for this reason, I regret that opposition MPs did not join us in moving this legislation forward and finally taking the chance to leave the EU with a deal that was acceptable to the majority of MPs.

As a voter who took part in the 2016 EU referendum, I expected my vote to be respected and the result implemented. I not only sympathise with the 60% (31,848) of North Cornwall voters who chose to leave, but also the many remain voters who respect the result and would like us to get on with leaving in an orderly fashion and supported this deal.