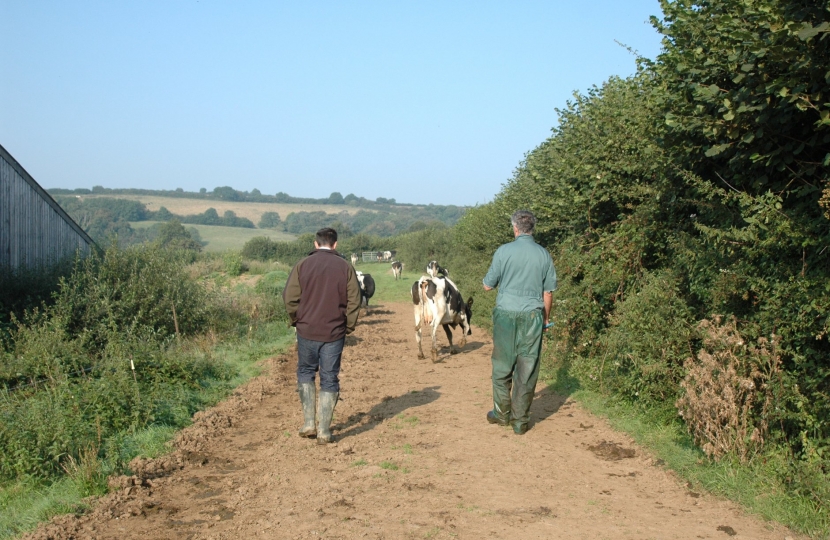 Whilst there are legitimate questions being asked in the farming industry - and I will do my best to answer them - I am also aware that some people in the UK want our trade talks to fail to support their view that leaving the EU was a terrible idea. They want to be proven right, and for that decision to be reversed, and they will do whatever it takes to make that happen.

The UK Government will not compromise on standards. Our manifesto was clear that in all of our trade negotiations, we will not compromise on our high environmental protection, animal welfare, and food standards. We remain firmly committed to upholding our high environmental protection, food safety and animal welfare standards outside the EU and the EU Withdrawal Act has transferred all existing EU animal welfare, food safety provisions, and existing import requirements, onto the UK statute book. So, at a minimum, our standards cannot be lower than the EU’s.

The legislation for the hormones in beef ban is contained in the EU legislation 2003/74/EC – which was copied over into UK law.

Chlorinated chicken imports are also banned under retained EU law under Section 3 of the Withdrawal Agreement. Regulation (EC) No 852/2004 defines ‘potable water’ as water meeting the minimum requirements laid down in Directive 98/83/EC.

The above regulation (EC) No 853/2004) lays down specific rules on the hygiene of food of animal origin for food business operators. It provides that food business operators are not to use any substance other than potable water to remove surface contamination from products of animal origin unless the use of the substance has been approved in accordance with that Regulation.

The UK’s food standards, for both domestic production and imports, are overseen by the Food Standards Agency (and Food Standards Scotland north of the border). They will continue to do so in order to ensure that all food imports comply with the UK’s high safety standards. Decisions on these standards are a matter for the UK and are separate from any trade agreements.

Parliament also plays an important role in scrutinising our trade policy. The Government has provided extensive information to Parliament on our negotiations, including publishing their objectives and economic scoping assessments prior to the start of talks.

At the end of trade negotiations, they will lay the final agreement text in Parliament alongside an explanatory memorandum and a final impact assessment. In the case of Japan, the US, Australia, New Zealand and the Comprehensive and Progressive Agreement for Trans-Pacific Partnership (CPTPP) they will also work closely with the International Trade Committee and International Agreements Sub-Committee, so those committees may produce an independent report on those deals.

Other important scrutiny is provided by a range of groups who advise the Government on trade policy. These include the Department for International Trade’s Agri-Food Trade Advisory Group, which was recently renewed and includes over 30 representatives from the Food Industry.

DEFRA also continues to run various supply chain advisory groups such as the Arable Group, Livestock Group, and the Food and Drink Panel.

The Government have also established the Trade and Agriculture Commission, which the National Farmers Union (NFU) are members of (and supported the creation of) to oversee agricultural trade negotiations and decisions. It has met six times and has set up three working groups covering consumers, competitiveness and standards, bringing more than 30 additional representatives to the Commission’s work. Recently, the Commission launched a call for evidence to 200 relevant parties and experts covering several questions, including how standards can best be upheld while securing the benefits of trade. Its report will come before Parliament to be debated after the end of its term.

The Government has now committed to a rapid review and a consultation on the role of labelling to promote high standards of animal welfare. This is welcome news to me, as I am very keen to ensure people know what they are buying and have campaigned for this review for some time.

For example, 30% of our processed chicken sold in pies/sandwiches and nuggets are imported from Thailand. At present, this happens with very little knowledge to the wider public. An effective labelling system will allow people to make positive choices about the food they eat.

Labelling problems have seen food entering the UK and being labelled as being produced in the UK when in fact it has only been packaged here. This has happened with the British beef industry and it is absolutely right that consumers can make an informed choice once they know where the product has come from and how it has been reared.

Thinking back to the votes on the amendments: I appreciate some of the amendments were submitted in good faith, but the safeguards they seek to create are already in UK law. Tying the Government’s hands and placing restrictions on trade in such a way is therefore completely unnecessary.

Likewise, the amendment made covering pesticides is unnecessarily wide-ranging and would have disproportionate effects. Restrictions on use of a pesticide can, and I believe should, be made through the authorisation system instead.

It should also be noted that all pesticide users are required by law to take all reasonable precautions to protect human health and the environment and to confine the application of the product to the area intended to be treated.

I understand the strength of feeling on this issue. The current high standards of pesticides in the UK safeguards people and the environment from any potential harm, and consumers want to know that these standards will remain. I do not support relaxing the UK’s high standards in any new trade agreements, and having raised concerns with them, the Government and they have assured me that the UK will not compromise on these standards.

I appreciate there is nervousness in some farming communities at the moment. I want to reassure them that they will always have my full support, and I will always be here to listen to their concerns if they get in touch with me directly.

I believe it is possible to back British Farming, back high standards, and back a global trading Britain outside of the EU.

I implore my constituents to see through some of the false information being spread online and in some parts of the media.