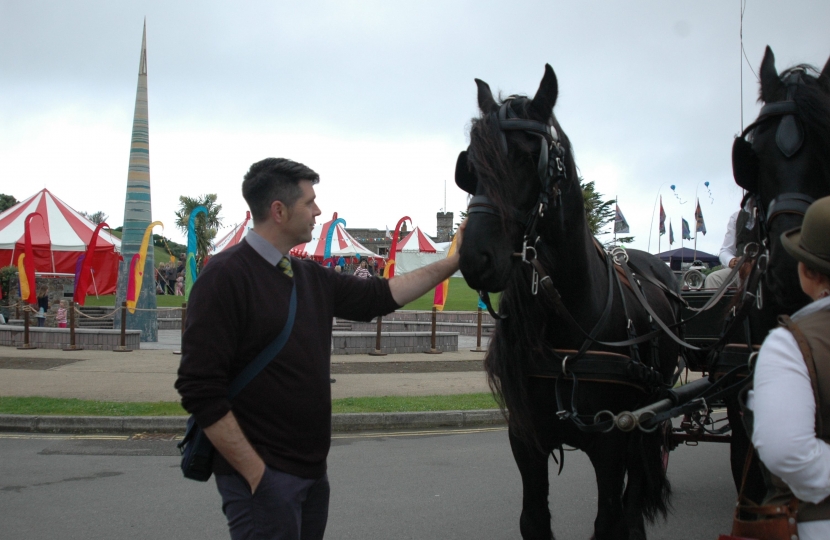 Both Scott Mann and the Government have committed to strengthening animal welfare standards after Brexit following a recent vote in Parliament on animals being classed as 'sentient beings'.

The UK currently has some of the highest animal welfare standards in the world, and after Britain leaves the EU, it will be have the ability to strengthen these standards further.

Concerns were raised after a Green Party amendment to the EU (Withdrawal) Bill was voted down by a majority of MPs which would have classed animals as 'sentient beings' as is currently the case in the Lisbon Treaty.

"This Government is committed to the very highest standards of animal welfare. As the Prime Minister has set out, we will make the United Kingdom a world leader in the care and protection of animals.

"It has been suggested that the vote last week on New Clause 30 of the EU Withdrawal Bill somehow signalled a weakening in the protection of animals - that is wrong. Voting against the amendment was not a vote against the idea that animals are sentient and feel pain - that is a misconception.

"Ministers explained on the floor of the house that this Government’s policies on animal welfare are driven by our recognition that animals are indeed sentient beings and we are acting energetically to reduce the risk of harm to animals – whether on farms or in the wild. The vote against New Clause 30 was the rejection of a faulty amendment, which would not have achieved its stated aims of providing appropriate protection for animals.

Michael Gove also said that the Government will ensure that any necessary changes required to UK law are made in a "rigorous and comprehensive way to ensure animal sentience is recognised after we leave the EU", adding that the Withdrawal Bill "is not the right place to address this, however we are considering the right legislative vehicle."

"The UK was the first country in the world to implement laws protecting animals, and the government has publicly stated that animals are living sentient beings. I share its continuing commitment to the highest standards of animal welfare and there is absolutely no debate over whether an animal feels pain.

"I understand that the main reason why the Lisbon Treaty of the EU classes animals as sentient beings is to harmonise the legal status of animals under the French Civil Code with its Panel and Rural Codes, which already recognised animals as having interests that could not apply to inanimate property.

"However, because we already have the Animal Welfare Act 2006 in place, which makes it an offence to cause any unnecessary suffering to an animal, we did not need to transfer the "sentient being" part of EU legislation into UK legislation. The Act also contains a duty of care, which means that anyone responsible for an animal must take responsible steps to make sure its needs are met. Therefore, the amendment by Caroline Lucas to the EU Withdrawal Bill was not necessary.

"The UK has some of the highest animal welfare standards in the world, yet the EU protocol on sentient beings still allows bullfighting, veal farming, foie gras and live animal exports, and Brexit will allow us to strengthen them further.

"In recent weeks, the Environment Secretary Michael Gove has announced plans to ban ivory sales to help bring an end to the ivory trade and elephant poaching, mandatory CCTV in slaughterhouses and plans to increase sentencing for animal cruelty to 5 years, stronger sentences for those convicted of animal cruelty, bans on plastic microbeads to protect our oceans and seas, and restrictions on the use of neonicotinoid pesticides in order to protect bees.

"Animal welfare is an absolute priority for the Government and an area which I care deeply about."

"Once we have left the EU there is even more we could do. EU rules prevent us from restricting or banning the live export of animals for slaughter. EU rules also restrict us from cracking down on puppy smuggling or banning the import of puppies under 6 months. Article 13 has not stopped any of these practices – but leaving the EU gives us the chance to do much better. We hope to say more in these areas next year.

"This government will continue to promote and enhance animal welfare, both now and after we have left the EU."