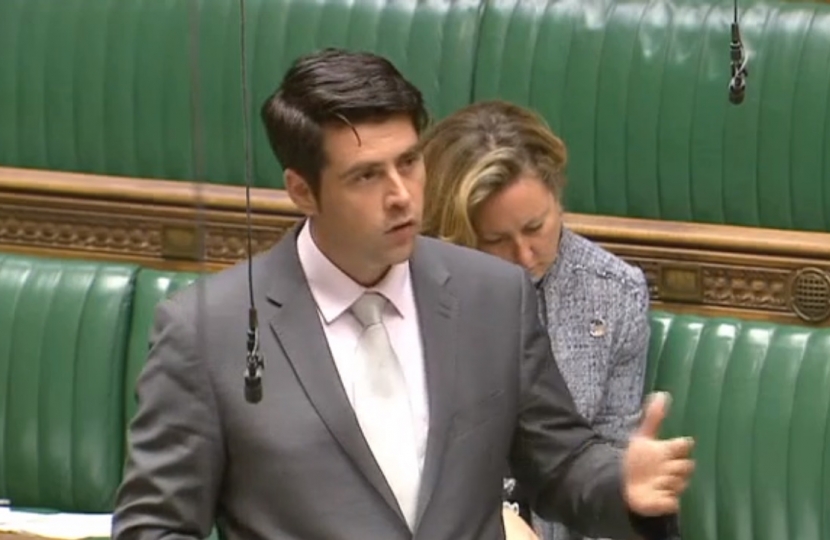 Scott Mann has welcomed the Digital Economy Bill into Parliament which will legislate for a Universal Service Obligation of around 10-Mega bits per second for all broadband customers as well as a new Electronics Communication Code which will revolutionise the provision of broadband through the ground and through the air.

Speaking today in the House of Commons, Scott said he welcomed the Bill which will enhance the provision of broadband for all those who want it, highlighting the painfully slow speeds that families and businesses still endure.

Addressing the House of Commons and Government Ministers, Scott highlghted the successful rollout of superfast broadband to 95% of households, but stressed that there was still work to do for thousands of other people.

"As a large and rural area, North Cornwall faces the typical challenges that other rural parts of Britain face when trying to modernise and to embrace new technologies and infrastructures.

"Scores of people across North Cornwall’s countryside, moorland and remote coastal areas not only lack access to superfast broadband, but lack access to a basic and reliable broadband service.

"For example, numerous farmers have written to my constituency office to complain about having to submit their basic payments and not being able to access broadband in order to do so. Numerous small rural businesses that need to submit VAT returns and advertise their services through attractive internet websites have also reported poor internet speeds. Families in small villages who want to shop or speak to loved ones all over the world all too often cannot get access to these services."

"I understand that the USO aims to provide 10 megabits per second, which is enough to do tasks such as sending emails and browsing websites. That will help many farmers, businesses and households in my constituency to access a level of broadband that they should expect to receive, and it will also allow them to provide their services and to hold the service providers’ feet to the fire."

Scott also said it was "completely unacceptable" for customers to receive slow internet speeds when they are paying for fast broadband, adding:

"Farmers are increasingly reliant on broadband. A recent survey by the National Farmers Union found that 58% have speeds of less than 2 megabits per second.

"Given the access to streaming video capability that we now demand from our internet, whether we access vital services to engage in e-learning, to catch up on our favourite programmes on Netflix or other providers, ​or to play fast-moving computer games, the USO is more important than ever."

Scott also urged the Governement "to be bold and ambitious" with the USO, asking them to consider statutory speeds of 15Mbps which will cater for modern demands of the internet for video streaming and high density websites.

Scott then welcomed the new Electronic Communication Code, which will reform the rules currently in place that regulate internet and mobile service providers.

The Bill proposes to give greater freedoms to service providers so they can build and modify their broadband cabinets or mobile phone masts on private land.

"By continuing to roll out better mobile coverage, especially in areas such as North Cornwall, we should seek to benefit not just residents, but tourists who come to those areas. By improving the signal in many areas on North Cornwall’s coastline, we will improve Cornwall’s tourism offer.

"Phone signal is also very important for communications with the emergency services, and enabling further coverage across North Cornwall should help to keep Cornwall safe. Coastguards have no mobile phone access in many of the outstanding natural beauty on our coastlines, which presents a huge problem."

"As a regular user of the railways, I know the frustration that many passengers feel when they constantly lose mobile phone signal or wi-fi internet service. Having communications on our trains is imperative to remain productive on long journeys, especially in the south-west, where rail journeys are often longer due to lower track speeds. I hope that the Government will work with the phone and train operators to improve the provision of mobile coverage across the whole of the south-west."

Concluding his speech, Scott highlighted the importance of the digital economy sector to the South West which employs thousands of people and also can unlock new opportunities to IT companies.

"Ultimately, I am keen to see North Cornwall embrace the digital economy for day-to-day communications and to attract more information technology, coding and gaming companies to the area. North Cornwall is strategically located near the A38 and A30 trunk roads, and it is well situated between two regional airports. It is a good home for IT companies that want to benefit not only from good internet connections and transport links, but from living in a fantastic place.

The south-west already hosts many people in the digital sector. In 2014, the number stood at 80,000 employees. With its expanding superfast broadband network, North Cornwall and the wider community has huge untapped potential."

The Bill was voted through by MPs at Second Reading, and it will now head to a Public Bill Committee - which Scott will be sitting on - to scrutinise each line of the Bill as well as to consider amendments from Government Ministers and backbench MPs.